I mentioned it earlier, but here's a look at ESPN.com's "New Classic: The Catalyst" (a.k.a. Mike Green): 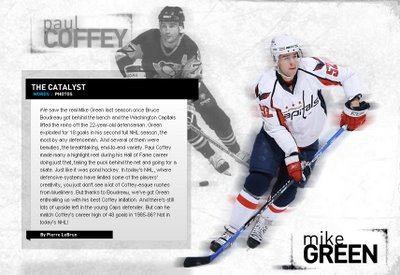 To understand the magnitude (perhaps silliness, truth be told) of Pierre LeBrun's comparison, take a look at Paul Coffey's career numbers. Positively staggering. There's simply no way to put into context something like the fact that in 1985-86, Coffey had 48 goals, 90 assists and had a plus-61 rating in 79 games while last season, the entire Caps blueline had 34 goals, 114 assists and a plus-36 rating... in 492 man-games.

Now, no one's saying that Mike Green is or ever will be Paul Coffey - Coffey is a three-time Norris Trophy winning Hall of Fame defenseman with four Stanley Cup rings. But there the two of them are together, with "Green enthralling us with his best Coffey imitation," and that in and of itself is high praise indeed.

I have a question, though - if Mike Green is such a world-class puck rusher, why can't he crack LeBrun's roster for Team Canada?