Which Cap Is Next To Have His Number Retired?

Share All sharing options for: Which Cap Is Next To Have His Number Retired?

The obvious question to ask when a team announces that it will be retiring a jersey number is, "Does he deserve it?" Once every side of that argument is beaten to death, however, thoughts naturally turn to, "Who's next?"

If we look at the honor the team is going to bestow upon Mike Gartner as recognition for all that he did for the Washington Capitals franchise, you'd think that Peter Bondra and/or Olie Kolzig would be in line for similar ceremonies. If we look at Gartner's Hall of Fame enshrinement as the key to his soon-to-be-memorialized Caps immortality, perhaps Scott Stevens and/or Larry Murphy (sorry, Alex, pick again!) deserve a look. Of course, in Gartner's case, it's a combination of the above - his years and stats in D.C. constituted a significant portion of his Hall of Fame career - that has ensured that no one will ever again wear the number 11 for the Washington Capitals (sidenote: kudos to the rest of the Caps blogosphere for steering clear of the obvious and lame "It No Longer Goes To Eleven" post title).

But perhaps it's more than just those factors. Perhaps... it's the 'stache.

Here's a look at the three players who have previously had their numbers retired by the Caps and Gartner (from left to right, Yvon Labre, Rod Langway, Dale Hunter, Gartner):

How Hunter ever got his number retired is beyond me, given the push brooms mounted on the other honorees' upper lips. But if we take the team's apparent facial hair fetish to its utterly illogical conclusion, perhaps we can make a more educated guess as to who's number is next to be set aside for good. Here are the best bets: 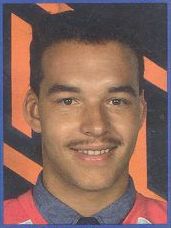 Kolzig hasn't had this Clark Gable-esque 'stache since very early in his career, but combine it with his lifetime numbers with the team and I'd say he's a lock to have his number 37 hanging from the Verizon Center rafters before too long. 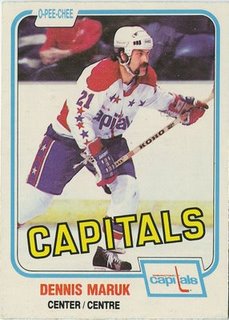 Before there was Gartner or Bondra or Ovechkin, there was Maruk. From 1978 through 1983, Maruk potted 182 goals and 249 helpers, including a 60-goal/76-assist/128-PIM 1981-82 that still stands as the single-season team high in points (the goal total stood for more than a quarter of a century until A.O. came along). Throw in a non-ironic, heterosexual horseshoe moustache and you've got to consider 21 a contender for retirement. At least Maruk can rest easy knowing that the number is currently being honored by the über-manly Brooks Laich on a nightly basis. 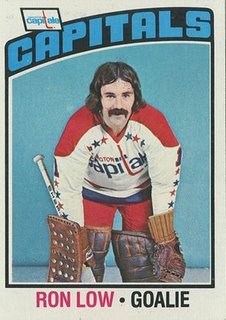 Low started 145 games for the Caps from their inaugural season of 1974-75 through the end of the 1976-77 campaign, racking up a 30-94-9 record and a 4.86 goals against average, as well as the Caps record for losses in a season (36). No, Brent Johnson won't have to give up the number one anytime soon, but man... that 'stache/hair combo is something special. 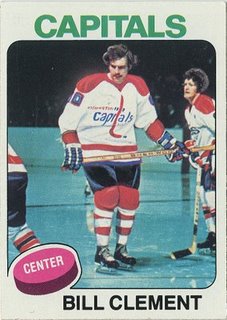 Clement only played 46 games for the Caps back in 1975-76 and scored but 10 goals. And his cookie duster wasn't/isn't even that great. But there's something to be said for longevity (and having a damn goofy hockey card), and given that he's had it for 30-plus years, that's an honorable display of commitment... but not enough to send number ten skyward.

Honorable mentions go out to Brendan Witt (whose Spring, 2006 lip scarf I've never been able to find a picture of) and the following half-dozen hirsute hockey heroes: 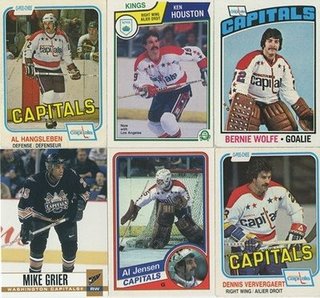 So there you have it - a couple of former Caps who could be next in line for the ultimate honor a team can give one of its players, a handful of other manly men and Bill Clement.

As for possibilities from the current Caps squad, pickin's are indeed slim (assuming, that is, that the team doesn't invite any of these guys to training camp)... though perhaps Karl Alzner is somehow even more savvy than we all thought.