If You Want Goals, Go To The Net

Share All sharing options for: If You Want Goals, Go To The Net

In a season full of memorable quotes, perhaps the most unforgettable of post-game soundbites came from Brooks Laich, as he tried to explain his emerging goal-scoring prowess by recalling what a former coach had told him:

Laich, of course, scored 21 goals last season, and his highly efficient 17.6% shooting percentage would seem to indicate that he scored the bulk of them from in tight (and might also indicate that he's going to have a hard time repeating his 20-goal campaign in 2008-09).

In fact, according to the NHL's play-by-play sheets, Laich did score most of his goals (15 of 21) from less than 20 feet from the goal (to give you a frame of reference, that's the distance at a right angle from the goal line to one of the faceoff dots), and if you totalled the distances of all of his 2007-08 tallies, you wouldn't make it from one end of the ice to the other and back - his 21 goals added up to 396 feet, an average of 18.86 feet per goal. Laich scored five goals from inside of 13 feet and only scored once from more than 28 feet away, a 42-foot "bomb" (the blueline, for reference is 64 feet from the goal line).

Laich isn't afraid to get beaten up in front for a goal, and often reaped the rewards of his hard work, scoring eight times on the power play. Surely, Laich was more proficient in close than, say, Alex Semin, right?

Not so fast, my friend.

The average distance on Semin's goals was actually less than Laich's - 18.58 feet - and 18 of his 26 goals were scored within 20 feet of the net (slightly lower than Laich's percentage), nine from within 13 feet (a higher percentage than Laich's). Semin's speed afforded him more breakaway opportunities than Laich gets, of course, but the numbers are still somewhat surprising - I'd have expected most of Semin's goals to have come from the 21-to-30 foot range (only five did).

Point being, Brooks Laich isn't the only one who knows that if you want goals, you go to the net.

Post script: When I got home from work yesterday, this was waiting for me: 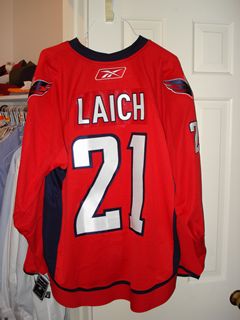