The Con Is On?

Share All sharing options for: The Con Is On?

Buried in Wednesday's Roundup was the sad story of a Bruins rookie whose name was misspelled on his jersey in a B's preseason game. Now comes another example demonstrating that NHL equipment managers, like players, need some time to get into mid-season form, as last night the Carolina Hurricanes had a goof on the nameplate of their tough guy defenseman (who decided to throw a trio of punches at Chris Clark after the linesmen had stepped in to separate the pair and received two other roughing minors in similarly cowardly instances). Luckily, we've got a picture of how his sweater is supposed to read: 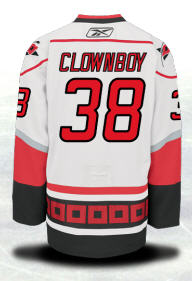