In the lead up to last night's game between the Caps and Devils (make sure to check out TRS's coverage, btw), I noticed some chatter about one of Jerseys' seventh round pick in 2004, Pierre-Luc Letourneau-Leblond. The fantastic Devs blog Fire & Ice referred to the guy with the longest name in hockey as "one of the biggest surprises of training camp," and head coach Brent Sutter raved about the "tough kid."

Actually, here was the result: 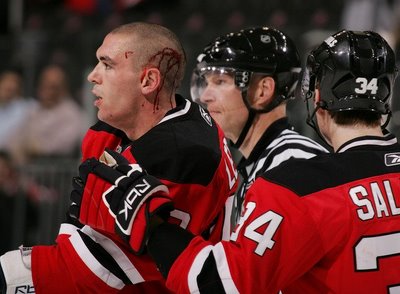 PL3, as he's known, earned big points for taking on Brash (Jamie Langenbrunner noted that "Anybody who goes with Brashear has my respect"), and the kid continues to make the Devils take notice.

And while he may have lost a decision to one of the League's reigning heavyweight champs, the moment was not lost on him:

"The guy is from Quebec-City, he's a French-Canadian and I've been watching him growing up and now I'm here fighting him," Leblond said after tonight's 3-2 preseason loss to the Capitals at Prudential Center. "It's kind of special." ...

"All game long he was asking me if I was tough in French," Leblond said. "He said, 'good fight.'"

Donald Brashear: a living legend doling out wisdom one left jab at a time.

H/t to Peerless and HockeyFights on the pic and vid.