Who Was And Wasn't Worth It

Share All sharing options for: Who Was And Wasn't Worth It

If you thought we were done with our de facto stats week, you've got another thing coming. Another one, actually. For our final (I think) look at individual player contribution (PC), we're going to throw everyone from last year's team together and see who were the best values and who was less economical.

Allan Ryder provides the overview (as well as much of everything else herein):

PC is denominated in points in the standings (that is goals created/prevented are translated into points in the standings). A PC "point" is scaled to be 1/10th of a standings point and the PC points allocated to a team are therefore 10 x Points.
...
As a rough rule of thumb it takes 100 or more PC points for a skater to be an all-star candidate (the story with goaltenders is different). At 80 points you would consider a skater to be a team star, 60 is a team leader, 40 is a solid contributor and 20 is a weak link. With a salary cap of $50 million (all figures U.S.) for the 2008 season, a rough guide to player value is $50,000 per annum per PC point (or $1,000,000 for every 20 PC points). This is based on a team spending the cap amount and targeting a 100 point season (a comfortable berth in the playoffs). [Ryder at p.4]


When Ryder says "the story with goaltenders is different," he means that the scale is different from that used for skaters due to the obviously higher contribution - both good and bad - a goaltender makes. For example, sixteen of the top 17 PCs belonged to netminders in 2007-08 (Alex Ovechkin at 13th was the lone forward), and 28 goalies had PCs above 100 (13 skaters did). Oh, and by "all-star candidate," Ryder is referring to the year-end All-Star Team, not the midseason exhibition.

Got it? Good. So if we take player salaries and the number of days on the NHL roster into account (a minimum of 41 so that the trade deadline acquisitions could be included, and I adjusted Eric Fehr's days on the roster, which I believe to be incorrect), here's the cost per PC point of the 2007-08 Capitals: 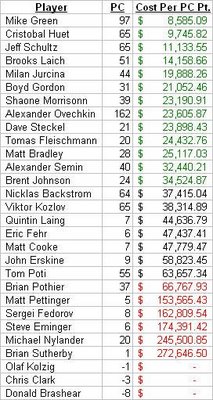 The costs in green and red represent 30% or greater deviations from the $50,000 baseline detailed above. And don't forget that for most of the guys on this list, they received their full NHL salary even if they didn't play 82 games, so you can pro-rate the PCs of anyone who didn't play a full season (for example, Boyd Gordon and David Steckel each played 67 games, so their PCs for the year would be around 37.8 and 26.2, respectively, putting them in the "solid contributor" to "weak link" range).

Anyway, all that math and it tells us that in 2007-08 Ovechkin was a god, Mike Green was a ridiculous value and Michael Nylander didn't quite earn his $4,875,000 cap hit (or $5.5 million salary). You didn't need a weatherman to tell which way the wind blows there, did you?

But there's more in there. Jeff Schultz was both a "team leader" and a great value (as I've noted before). Tomas Fleischmann may have been cheap, but considering that he only contributed 22.1 pro-rated PCs, he was most definitely a "weak link." John Erskine cost next-to-nothing but still couldn't provide any real value (14.7 PCs, pro-rated). Brian Pothier was making a huge contribution and on pace to be a real value (a whopping 80.8 PCs, pro-rated), before his season and career were derailed. And so on.

Point being, for a team to have a successful regular season in a salary-capped League, there have to be a decent number of "values" (the Greens, Schultzes, etc.) and a minimal amount of "wasted" spending (pricey veterans that get hurt or underperforming players making Matt Pettinger/Steve Eminger money) up and down the roster, but you knew that.

With Ovechkin, Semin, Green and Brooks Laich all getting big pay raises for 2008-09, it's unlikely that any of that group will still be great bargains (though obviously still invaluable contributors), making it all the more critical that the club's higher-paid players stay healthy and that lower-priced contributors continue to be just that. Now's the time to step up, Eric Fehr.