Share All sharing options for: Primary And Secondary Scoring

If you can remember all the way back to last season (seems like an eternity ago, doesn't it?), you'll recall that we frequently harped on the need for the Caps to find some more secondary scoring - the top line was locked and loaded and everyone else was more or less playing like they were just plain loaded.

But the Caps never quite did find a second line combination that clicked consistently clicked, and by the time the problem came to a head, the Caps were in a rather deep hole in their first round playoff series with Philly before Bruce Boudreau shook things up. Live by the big line, die by the big line, I suppose.

Today we're taking a look at some data culled from the fantastic (and new-to-me) FrozenPool.com (h/t Alanah) and having some fun with line combos and production (whee!) to hammer home a few points.

To begin with, I mentioned above that the Caps couldn't find a second line that was productive enough to stay together (or stay together long enough to be productive). What do I mean by that? Well, I think we can all agree that Alex Semin has the most offensive talent of any forward on the team who wasn't on Boudreau's top line (i.e. Alex Ovechkin-Nicklas Backstrom-Viktor Kozlov). If you had to guess with which pair of forwards Semin was the most productive (point-wise, even-strength) last season, you'd probably have guessed Michael Nylander and Tomas Fleischmann. And you'd be right. But would you have guessed that he had only four even strength points skating with that duo? Or that he was equally productive skating with Flash and Boyd Gordon?

Here's Semin's even-strength point production, by line combination:
Interestingly, the Caps' best post-season line - Semin-Backstrom-Laich, who tallied six points skating together, three of which were Semin's - didn't have a single point when combined during the regular season, despite skating 210 shifts together over the course of the campaign (and by "shifts" here and throughout, we mean "on-ice line occurrences"). Which brings us to our next point, and that's how many shifts Semin skated with different linemates (and if it's not clear why we're using Semin, it's because he's the most likely commonality among the most common second line combos).

The Ovechkin line skated 2,165 even-strength shifts together in 2007-08 (that's a big number, but for perspective, the Prospal-Lecavalier-Frodo line down in Tampa took to the ice 2,434 times and Zetterberg-Datsyuk-Holmstrom skated together 2,744 times five-on-five). Ovechkin's next most frequent linemates were Kozlov and Chris Clark, with whom he skated 414 shifts. Anyway, here's a look at Alex Semin's top ten most frequent line combos, with the frequency on the chart and the linemates (by jersey number) in the key: 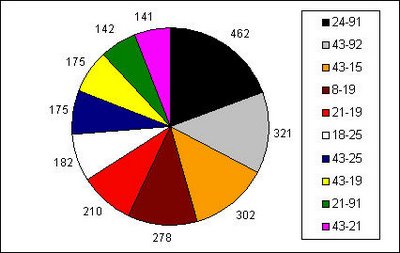 As you can tell, I was going for "readable" over "beautiful" with that color combination. As you can also tell, the Caps' number two goal-scoring threat spent the season going through linemates like the Lightning go through netminders, which circles back to our main point on secondary scoring. The Ovechkin line combined for 79 even-strength points in 2007-08. Any guesses as to which trio was second on the team? [cue Jeopardy! theme] Give up? Quintin Laing, David Steckel, and Matt Bradley. With 16. Seriously. The rest of the top five are Fleischmann-Kozlov-Semin (10), Fleischmann-Laich-Fehr (10) and Fleischmann-Nylander-Semin(10).

Injuries happen and it's been said that a foolish consistency is the hobgoblin of little minds, but there's also got to be something to be said for keeping lines together to establish a secondary scoring threat. Looking at Alex Semin, it's got to be difficult to establish much chemistry with such frequent turnover (and with such frequent Fleischmann). Without question Ovechkin and his linemates benefited from their ever-increasing familiarity with one another - one can assume that Semin suffered from the opposite (and if there's a case to be made for Sergei Fedorov being worth $4 million this year, perhaps this is the centerpiece of that argument).

Reasonable minds can disagree as to whether Fedorov or Nylander is the better pivot for Semin, and which winger should be on the opposite side, but what is likely not going to be hotly debated is the value of settling on a line combination (or perhaps just a winger/center pairing) and sticking with it for a while. Hopefully player health cooperates in that endeavor.

While putting together the info above, I pulled some League-wide data that I thought was interesting but didn't really have a chance to fully distill, so feel free to discuss it in the comments. 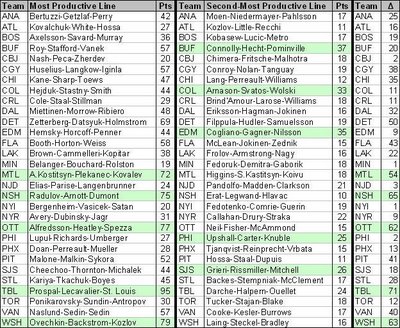 Click on that to enlarge, and the top five in each category are highlighted in green
There are some fairly goofy results in there. For example, Sidney Crosby isn't on either of the Pens' "top two" lines, but that's because he's on each of Pitt's second-, third- and fourth-most productive lines, but so are Evgeni Malkin and/or Ryan Malone. And some teams' top scoring threats are either in the second column (e.g. Olli Jokinen) or not on either list (e.g. Daniel Briere), as they got bounced around from line to line. But the names and numbers provide some perspective.

Anything jump out at anyone?