Poapst Headed For The Hall

Share All sharing options for: Poapst Headed For The Hall

I never thought I'd read the words "Steve Poapst" and "Hall of Fame" together in a sentence that didn't also include the word "janitor," but lo and behold, "Steve Poapst is being inducted into the Cornwall Sports Hall of Fame." And you know what? It's not even Poapst's first HoF induction (all of which can only help Steve Poapst Hockey Academy's cred). 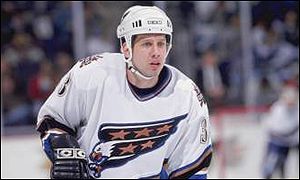 The undrafted Poapst, you may recall (but you're forgiven if you don't), played 25 games for the Caps back during the 1995-96 and 1998-99 seasons, registering a single goal and no assists. He'd go on to play 282 games for the Blackhawks, Penguins and Blues, wrapping up his career with a 41 game stint in St. Loo in which he had an assist and a minus-21 rating.