Earlier in the summer, Nicklas Backstrom declared, "I want to be a better hockey player. I have to work hard this summer. You want to be better every year, so you have to have a good summer."

Well, so far it seems his summer has included hooking onto Peter Forsberg's charity hockey tour, hanging out with buddies at the beach and stopping by a hockey camp (as even the biggest stars tend to do). But I'm sure the hard work is in there somewhere.

Anyway, as far as that hockey camp goes, here's a bit of the story (the relatively interesting parts), with translation courtesy of our good friend Gavlegirl: 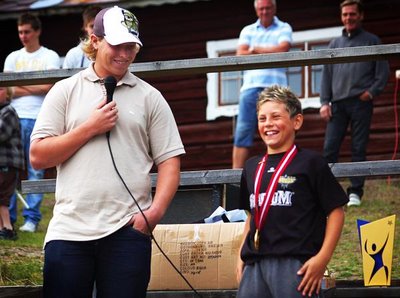 Nicklas Backstrom was this week's special guest. He brought along his awards and medals (from the SEL and his World Cup medal from 2006) and other hockey-related stuff. This young boy had his first World Cup medal around his neck, but we can't know for sure if it will be his last.

Bengt "Fisken" Olsson and Lasse Hedlund founded the camp and it is in its 28th year. This week it was visited by 140 youths, all here to practice hockey. This summer about 1,400 kids will attend from Sweden, Norway and even USA and Canada. Through the years, about 30,000 boys and girls have been here.

Every one of the kids are divided into groups that are named after the great teams in NHL like New York Rangers, Philadelphia Flyers, Pittsburgh Penguins and Colorado Avalanche. They will practice hockey on the ice and off the ice, some fun and play.

"It's hard" says a player who takes a short pause and drinks some water before he goes out there again shouting, "But it is very fun to play".

Outside the rink at the Lidas Slap Shot Range (of course named after defensemen Nicklas Lidström of the Detroit Red Wings) is 12-year old Gustav Forslund practicing his slap shot. He has traveled from the north of Sweden(Umeå) just so he can be here. He says, "This is the best and funniest camp, you get a lot of friends and the coaches are great."

He has already decided what he would be when he gets older. "I want to be a pro and play in NHL." Then he proudly shows his Foppa shoe with Nick's autograph on.

Bengt "Fisken" Olsson presents their guest for the week with these words - "This is a magician with the puck and he has played one season in the NHL and it was superb. He will be a superstar!" 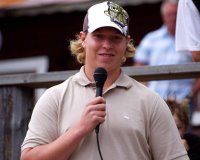 As Nick makes his entrance on the stage, everyone in the audience is loud and applauds. Nick tells them about his hockey career so far and gives some advice to the crowd. "You have to be stubborn, love the game but not rush into anything. You have to be patient and let it take how long it takes to reach your goals. You need to train, train and train but don't forget to have fun either."