Skeletons From The Closet, Vol. IV

Share All sharing options for: Skeletons From The Closet, Vol. IV

Sticking with the 1989-90 team, after Don Beaupre split a pair of decisions to open the season, the Caps decided to give their first round pick from the previous summer's draft a shot in net on the road in Hartford. The youngster made 19 saves on 23 shots against ("It's not that [he] was bad") and ten days later got another opportunity to play in Maple Leaf Gardens. But after an 8-4 loss to Toronto, he was sent back to Tri-City of the WHL and didn't make another NHL start until October of 1993. He would go on to appear in 708 more games for the Caps and set nearly every franchise goaltending record, but his appearance in this video (and in these cards) remind us that he was once a very young man with a very "weak mustache":

And here's a still, because Olie Kolzig is, and forever will be, the man: 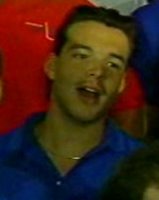