Share All sharing options for: Of Apples And The Proximity To The Trees From Which They Fall

A longtime Caps fan can't help but feel a bit nostalgic after the Caps made Anton Gustafsson their first pick, twenty-first overall, in the 2008 NHL Entry Draft, nearly thirty years to the day after the Caps selected Anton's father Bengt.

Personally, such nostalgia tends to send me straight for the white, corrugated cardboard boxes that house my hockey card collection (and to my old VHS tapes - that's Bengt at the 1:23 mark). Rooting through, I found the 1981 O-Pee-Chee gem below that included a brief description of the elder Gustafsson. 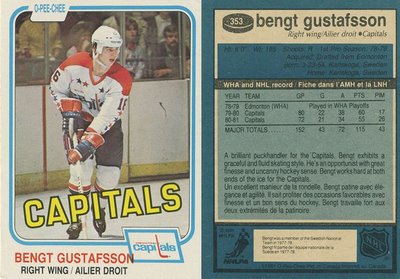 "A brilliant puckhandler for the Capitals. Bengt exhibits a graceful and fluid skating style. He's an opportunist with great finesse and uncanny hockey sense. Bengt works hard at both ends of the ice for the Capitals." [Emphasis added]

"Anton is a highly skilled player with strong puckhandling skills and playmaking ability. He is an effective passer through traffic who also has a good selection of shots. He's a tall, strong and talented two-way center with good vision and a fine understanding of the game. He plays a mature game even when playing against opponents who were two or three years older." [Emphasis added]

Anton's old man played 629 games in a Caps sweater and racked up 555 points along the way (good for fifth most in team history). If Gus II can produce anywhere near those numbers, it would be a most welcomed father-son similarity indeed.