Late last month, I posted a few words on and a picture of Carrie Milbank, the lovely and talented host of NHL.com's creatively named "The Hockey Show." Judging from the traffic that post generated, her boffo interview over at Orland Kurtenblog, and the fact that there are a multiple active threads dedicated to her on the Washington Capitals official message board, I think it's safe to say that Ms. M is on the verge of blowing up (if she hasn't already).

In that interview with Kurtenblog, Carrie noted of her online admirers that "for every dozen or so cool emails there's one or two creepy ones that seep through." Whether or not our initial email to her was one of those may never be known, but either way she was kind enough to a 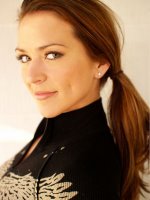 nswer a few of our questions. In fact, we're now "friends" (by the 21st Century definition of the word). Take that, high school.

Anyway, on to the interview (click any of the pics to enlarge 'em), and be sure to head over to CarrieMilbank.com if you just can't get enough Carrie.

Japers' Rink: Alright, let's get the obvious one out of the way first - why haven't your bosses at People.com put the mustachioed Sidney Crosby on "Who Looked Hot This Week"?

Carrie Milbank: If the show was called "Who Looked Hot On The Ice This Week Eh?" then I'm sure the Wizard of Croz would be right up there with the best of them. But in true "People" fashion the show is all about, well, fashion. Hope is not lost for Sidney, however, all he has to do is take a cue from Mike Comrie and Hilary Duff. We featured "Duffrie" a few weeks ago... aren't they just precious?

JR: You grew up in Houston, which isn't exactly known for its rich hockey tradition (no offense to the Aeros). Is "The Hockey Show" just a gig, or are you a fan?

CM: Yup, I love my hometown but there are 2 things I was deprived of growing up in Houston - snow and hockey. I had to play "Blades Of Steel" on my Nintendo to get my fill of faceoffs and fist fights – that’s where I became a hockey fanatic and although I strayed away for a few years to fulfill my dream of becoming an NFL Cheerleader, I am now back in the hockey world in full force and loving every minute of it – the fans are incredible, the players are passionate, and I’ve been honored to interview some of the greatest living legends like Scott Young, Mark Messier, Scotty Bowman, the list goes on. I respect the sport but I can’t get enough of the intense competition. I watch a lot of different sports when I’m at home and hockey is the only one where I actually yell at the TV without even thinking about it. As far as "The Hockey Show" gig goes, I’m lucky to have landed it.

We'll give Carrie a pass on "greatest living legends like Scott Young."

JR: As a former NFL cheerleader (team captain and two-time MVP, no less) and someone currently covering the NHL, what do you think of ice girls or some form of cheer squad at

hockey games? What "works" about cheerleaders for football that does and doesn't work for hockey?

CM: Having cheerleader blood shasaying through my veins, I wholeheartedly support my fellow sisters in spandex. As a hockey fan I don't ever want the action to end, but when it does I have to admit I can't keep my eyes off the cheerleaders. Gritty sports and hot girls will always go hand in hand but hockey is like the anti-football when it comes to cheerleaders. Think of all the limitations: permanently nippy sidelines (or worse yet NO sidelines), not-so-dancer-friendly places to perform (your choice of slippery ice or the corner of the mezzanine behind the beer cart), and fans who would rather just see a good ol' fashioned fight already (I know because I'm one of them). Hockey cheerleaders must really love what they do to overcome all of those obstacles with a perfect tan and a smile... high kicks all around ladies, keep up the good work!

JR: You have TV hosting experience in all sorts of programming. In a perfect world, what are you doing five or ten years from now? Whose career would you most want to emulate?

CM: Very few people out there are covering sports one day and entertainment the next, so I’d like to be a chameleon doing both as long as I can. If I were to follow in someone else’s footsteps I would have to choose one genre or the other so I’d rather pave my own way. I’ve been in the TV biz for about 5 years and so far I’ve just been going with the flow which seems to be working for me… if I start planning now, I might mess up my mojo.

JR: If we could turn you into the next Erin Andrews, would you want that?

JR: Oh, snap. What has the Internet meant to and for your career?

CM: Best thing about the Internet is that it connects me to fans – not necessarily "Carrie Milbank fans" but other real people who share my passion for hockey or tennis or fashion or

whatever. Thankfully the Web has created a lot more work for TV Hosts, but television and the Internet are steadily becoming one in the same and I’m excited to be at the forefront of technology.

JR: I'd have my blogger card revoked if I didn't ask what your thoughts are on credentialing bloggers and giving them the same access afforded members of the traditional media, so consider the question asked.

CM: Bloggers absolutely deserve all-access! Yeah there’s a lot of crap on the Internet but there’s a lot of credibility out there too… take out "the Internet" and replace it with "TV" in the statement above and it still rings true. Nothing is "traditional" anymore, especially in the media.

CM: Both of them at once... that is, playing on my fantasy hockey team of course.

CM: The ones who speak English.

CM: Ironically this happened when I was an NFL Cheerleader. We were promoting the Houston Texans with a performance during an Aeros game and they laid out a huge tarp on the ice for us to dance on. Guess what geniuses – a plastic sheet laid on top of ice still slides around all over the ice. Imagine 35 freezing cheerleaders (because of course we were wearing barely more than a bikini in the middle of an ice rink) wiping out one by one on rubber ice. Just one of the reasons wh 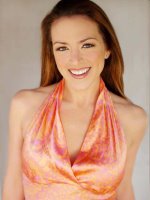 y Houston and Hockey do not go together.

CM: How about Wind Power? I know plenty of people who are full of hot air.

CM: It's a toss-up between Stephen Colbert and Seth MacFarlane. Brilliant. Hilarious. Yummy.

JR: Milbank-centric question - is Dana a girl's or a guy's name?

CM: I say it's a girl's name (the Carveys must have been drinking from the same bottle as the Milbanks) but you could ask the exact same question about my first name so who am I to judge. The Milbank family tree is littered with wacky names and since I'm sure we must be related somewhere along the line, I don't feel too bad about giving Dana a hard time. I'm going to name my first kid Flexor Gigantus. She'll probably be a hockey player.

JR: Will Roger Federer ever beat Rafael Nadal in Paris?

CM: Never say never. Federer is no doubt one of the greatest tennis players of all time, but Rafa's on a roll right now. The king of clay is fresh off a grass-court win at the Queens Club (1st grass-court tournament win for a Spaniard in over 3 decades) so the burning question for me is, can Nadal beat Federer at Wimbledon? There's a must-read article on Nadal in this month's TennisWeek Magazine by the way (shameless plug I know).

CM: Interviewer! This is taking way too much brainpower.

CM: Diet Coke in exchange for a lifetime supply... I am pathetically addicted.

JR: Who wins the Cup next year?

CM: Ask me after the draft.

JR: I'm blushing. Thanks, Carrie. Let's do it again sometime?