Caps Nab Pair In First Round

Share All sharing options for: Caps Nab Pair In First Round

The Caps left the first round of what is widely regarded as the deepest draft in some time having made two drafts pick. The team traded up from 23rd to draft Anton Gustafsson with the 21st pick and traded Steve Eminger and a pick to Philly for the 27th pick, which they used to draft John Carlson.

Both draftees have ties to the Caps - Gustafsson, of course, as the son of a Caps legend, and Carlson as a player headed to London, Ontario to be coached by Dale Hunter as a member of the OHL Knights.

Anyway, here's a pre-draft info dump on the pair, with more to follow (profiles courtesy TSN.ca): 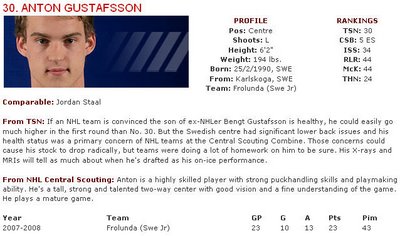