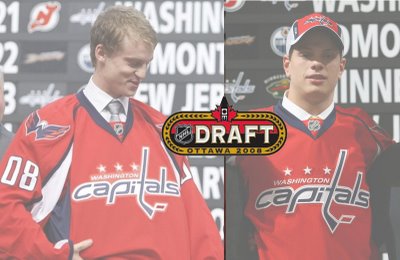 Update: Here are your second round Caps picks: The Caps two second round picks: Eric Mestery and Dmitri Kugryshev. More on Mestery here and here, more on Kugryshev here (hat tip to the diligent folks on the Caps Message Board on those last links) and here.

As far as rankings go, Mestery was the CSB's 59th North American Skater and Kugryshev the CSB's 10th European skater. I'll provide more info as it comes in.

Also, Sombrero Guy writes in with the following:

I look forward to hearing the story on that last point.

Update: The Caps took Braden Holtby, CSB's fourth-rated North American goalie, with the second pick of the fourth round. Here's his (sparse) HF Profile and an article on his WHL debut, as well as TSN's capsule:

Update: Joel Broda is the Caps 5th round pick, 144th overall. Broda - the Caps' second pick today who started the 2007-08 season with Olie Kolzig's Tri-City WHL club, was traded from Tri-City to Moose Jaw back in September.

Update: Greg Burke in the sixth. Read more about him here and a snippet here.

Update: The Caps used their last pick (7th round, 204th overall) on Stefan Della Rovere, a kid who, despite being smallish, got in 14 fights in the OHL this past season and whose handiwork you can see plenty of here.