When we recapped David Steckel's season a week-and-a-half ago, it was the last of our 2007-08 Rink Wraps. Now all the votes have been counted (thanks for well over 8,000 of them), and we can discuss the results.

Here they are, in graphical form (click to enlarge): 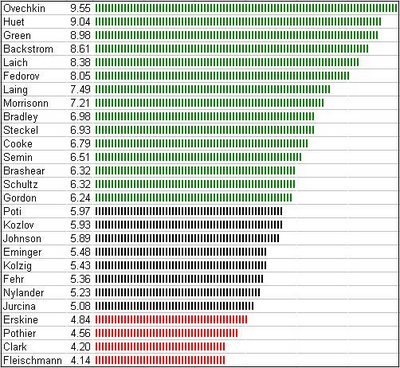 Two notes. First, given that you rated players relative to their potential for the season, the fact that a guy like Quintin Laing finished with a better score than Alexander Semin doesn't mean that people think the former is better than the latter, just that Q did better relative to your expectations for his season. Second, since I asked that if a player more or less played as you expected he would, you should give him a 5 or a 6, anyone in the 5-6 range is represented in black in the graph, with those players who didn't meet expectations in red and those who exceeded expectations in green.

So what jumps out at you? Any surprises? With whose score do you most disagree?