Share All sharing options for: Italy Goes To Hell

Gunther Hell, that is. He was Italy's #2 netminder tonight and was forced into action after starter Thomas Tragust got lit up by Alex Semin and the Russians to the tune of six goals in two periods.

On the night, the "Capital Connection" line of Semin, Sergei Fedorov (wearing #29 for a reason that I still haven't heard) and Alex Ovechkin combined for three goals, two assists and a plus-nine rating in Russia's 7-1 romp, with Semin leading the way with 2-1-4 of those totals.

UPDATE: Apparently the last time Fedorov played for Russia (CCCP back then) at the Worlds in 1990 he wore #29. So there you go (thanks, Dmitry). 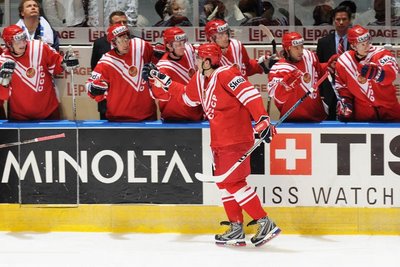