Unless you've been living under a rock, you've heard of the Grand Theft Auto series of video games and the recent release of Grand Theft Auto IV (hell, NPR did a piece on the game, so even my dad has probably heard of it).

Now that the game is on the street, we're getting a look at some of the gaming features that were left on the cutting room floor including this: 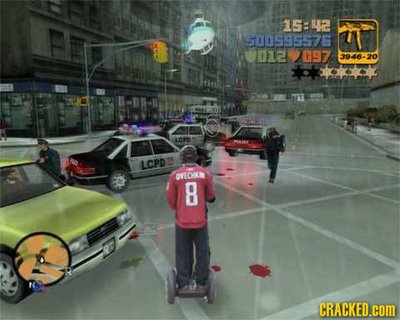 H/t to TJ on the link, and there's some background here in case during your time under the rock you missed the whole "Caps on Segways" brilliance.