Proving yet again that there's absolutely no demographic to which a politician won't pander, Democratic presidential hopefuls Barack Obama and Hillary Clinton were in North Dakota last week and took the opportunity to suck up to UND Fighting Sioux hockey fans as their beloved team prepared to head off to this week's Frozen Four.

So who faked being a hockey fan better? First, the photos, courtesy of the Grand Forks Herald: 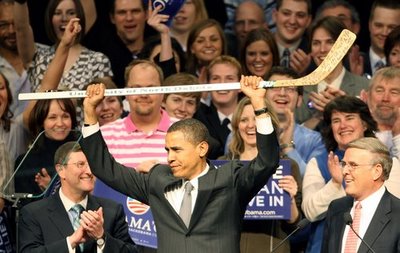 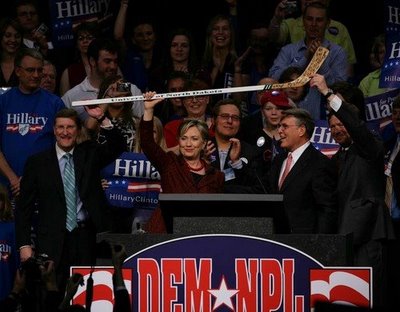 What the hell? Why does Obama look as if we should be impressed that he just clean and jerked a hockey stick? I've gotta give the edge to Hillary here, and the fact that she looks like she's ready to butt-end Kent Conrad gives her an extra edge - I bet she goes into the corners with elbows high.

And who talked the talk? Well, Hillary, oblivous to the controversy over the "Fighting" part of the UND team nickname, referenced the full name multiple times and even identified herself with the team:

"What if the Fighting Sioux had fought the Gophers to a tie and then given up? They didn’t... and that’s why they’re going to the Frozen Four."

Presumably Hillary thinks she's tied with Obama, which is darling but ridiculously and demonstrably untrue (par for the course, I suppose).

For his part, Obama played it down the middle, noting:

"I want to congratulate the University of North Dakota Men's Hockey Team for making it to the Frozen Four. I want to wish them luck in their game next week against Boston College.

"I am deeply honored and thankful to get that hockey stick. It will have a place of honor in my office but I promise you I will not wield it because my hockey game is worse than my bowling."

Most disappointing of all, however, neither candidate seemed to take a position on the critical-to-North-Dakotans issue of mascot violence, but we'd guess that Hillary is "pro"... if it'll get her votes.