Caps/Flyers: A History Of Carnage And Mayhem

Share All sharing options for: Caps/Flyers: A History Of Carnage And Mayhem

Something about playing an old Patrick Division rival in the playoffs just feels right.

This will be the fourth time the Caps and Flyers have faced off in the postseason, with the Caps winning a pair of series (1984 and 1988) and the Flyers taking the 1989 match up.

And while the playoff history between these two teams has created some of the most memorable moments in either franchise's history, the games (be they regular or post-season) have usually had a common denominator - brutally physical play. Case in point, the Caps have only had more fighting majors against Boston and Atlanta since 1998-99 than they have had against Philly, proving that you can take the Caps out of the Patrick Division, but you can't take the Patrick Division out of the Caps. 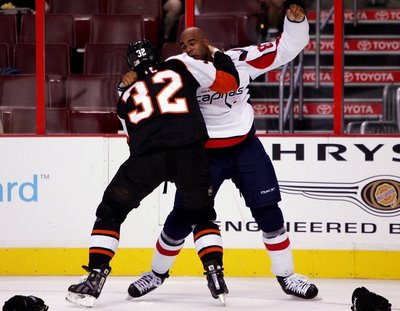 Psst... Riley... He's left-handed
Given that the Flyers plan to ramp up the physical play for the 2008 edition of the rivalry (to the delight of Pierre McGuire and others), I thought I'd take a moment and recap some of the pugilistic highlights of the teams' shared history (and if you like YouTubes of hockey fights - and who doesn't? - this is the post for you):
The Flyers were fourth in the NHL in fighting majors during the regular season (led by Cote, who was second in the League in fights). And while the Caps were 23rd overall, they're certainly not afraid to defend themselves (seven current Caps dropped the gloves in 2007-08). Which is good... because if history is any indicator, they'll likely need to.

It's good to be back among old friends, no?

Big ups to Hockeyfights.com and Flyers History for making this post worthwhile.