Not the gameplan that Bruce Boudreau drew up, to be sure, but the Caps will take those two points and skip town in a hurry. Some quick thoughts on the game:

So it's off to Chicago, where the Blackhawks have to win out to make the playoffs (good luck with that), the Caps will look for another two points, Nicklas Backstrom will look to prove himself against two of his top Calder competitors, and Alex Ovechkin will look to score his 59th goal of the season - which would (completing the loop on Chicago) be more goals than Bobby Hull ever scored in a campaign. 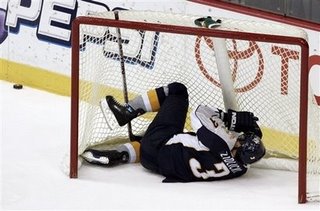 Marek Zidlicky tries to hide from his fan club, not realizing that they can see through the netting.
Elsewhere 'Round the Rinks:

In light of Vesa Toskala's one goal allowed last night, there's a great "Best of the Worst" compilation over at PPP... Finally, one year ago today we recapped a huge Caps win that featured a four-point game by Tomas Fleischmann (which is as many points as he has in 11 games since February 15).