So If It's Not His "Willingness To Shoot" That Makes Him Selfish, What Is It?

Share All sharing options for: So If It's Not His "Willingness To Shoot" That Makes Him Selfish, What Is It?

NHL.com ran an article yesterday on Cristobal Huet and teased it on their front page with a curious caption that really wasn't expounded upon in the article itself. Take a look: 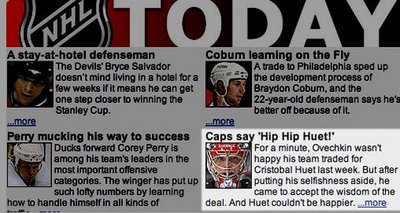 Now, I'll let you decide whether it's "Russian sniper stereotyping" or just sheer stupidity (hint: it's the latter), but "selfish" is probably one of the last words I'd use to describe Alex Ovechkin - right after "clean-cut" (which I recognize is two words, but go with me for a second) and before "unhappy."

Anyway, I'm guessing the site got some blowback on the caption, as today's front page is all too quick to mention that just because he has more than 23% more shots than the second most trigger-happy player in the League, it doesn't mean he's - you guessed it - selfish. 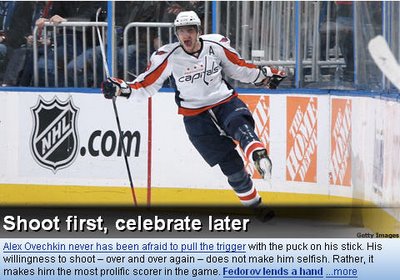