I've got some good news and some bad news. Which do you want first? The bad? You don't get a preview of tonight's game from me (I know, you're crying). But as this is the 43rd time the Caps have played Atlanta this season, you shouldn't need one (though here's a little nugget for you - Atlanta is 2-9-3 in the second game of back-to-backs, and they had a barn-burner with Calgary last night).

The good news? I've got an awesome Friday time waster for you - the Japers' Rink Eastern Conference Playoff Predictor, which I have shamelessly ripped off from Battle of Alberta. Think the Caps still have a shot at the playoffs? Think they're done? Not sure? Predict the rest of the season's games that matter and you'll find the answers to all of your questions. Note: it's an Excel doc, so when you click on the thumbnail below you'll be prompted to download a file (don't worry, I've been checked out - no viruses here), then open it, follow the directions and you're on your way. 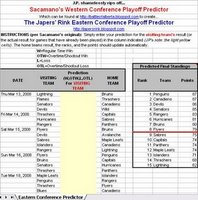 So are you throwing down a deposit on playoff tickets or drowning your sorrows? Let us know how your top eight pans out in the comments, and keep The Predictor on your desktop, update it daily, feed and water it, etc. - it's yours now.

Olie Kolzig as the all-time face of the franchise - what do you think?... Ted Leonsis was on the Junks earlier in the week and the interview can be heard here (segments 6, 7 and 8 from 3/12; h/t to Rage) Bengt Gustafsson's son Anton may already be a top NHL prospect, but another Swedish Cap pivot's kid may not be far behind (h/t to Rich for the link).... Matt Pettinger misses the Caps more than they miss him.... Justin Mrazek (8th round, 2004) has been solid for Union College.... I haven't the foggiest idea who Nathan Schwartzbauer is, but the Caps are his favorite team, so he can't be all bad (and yes, that might be the most worthless link I've ever posted)....Memo to GMGM: sign Mike Green before he reads this article.... Finally, one year ago today we railed against a silly rule change and two years ago today we heard about the team's summer plans and noted a couple of fantastic Daniel Alfredsson quotes.