With no game to recap or preview, today we reached out to bloggers from Montreal, C'Bus and Vancouver to get their takes on the three trades the Caps made on Tuesday (and if any Atlanta bloggers want to chime in on the Giroux-for-Motzko deal, feel free to do so in the comments... on another blog).

Here's what the other side thought of the Caps' trio of trades (both pics by KB from yesterday afternoon at Kettler, btw):

Cristobal Huet is a fine person, a fine netminder and a fine team player. Unloading him for a late 2nd rounder in 2009 on the brink of possibly the team's best run since they won the Cup in 1993 makes no sense to me. Carey Price will one day be a great goaltender, so will Jaroslav Halak. Putting the season, the playoffs and your team's success on the shoulder of two goaltenders that haven't even combined for 50 NHL games let alone 0 playoff games is foolish and risky.

Huet will help a struggling Washington climb to win the division, and I hope Cristo all the best; he was a personal favourite and certainly well liked by the fans, the media and his teammates. The message he left on the locker room whiteboard was 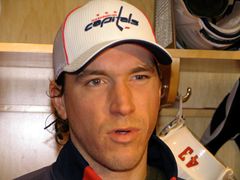 Only time will tell if Bob Gainey made the right move, but as it stands, he did not.

The message Huet left? Nobody knows word for word, but Chris Higgins and Saku Koivu were both sad when interviewed about it, Higgins said he wished them the best of luck and that he was honoured to have been their teammates, something along those lines.

This move was a headscratcher and I am growing tired of Gainey as a GM. He never made any great moves, in fact, what he's probably done more than anything is disappoint us. This year he didn't disappoint, he let us down...he's lucky we have Trever Timmins doing a fantastic job as a head scout, otherwise, he'd be out of a job by now.

I don't hate Gainey for yesterday, but I am not the first to pop up and defend his bonehead moves (such as the Ribeiro trade, and even worse now, the Huet trade).

George McPhee flat out stole Huet and now I'm confident you guys will have a menacing team heading into the playoffs. - Bleu, Blanc et Rouge via The Faceoff Circle

If Bob Gainey was in a high stakes poker game, then he certainly likes to take risks!! Gainey's trade of Cristobal Huet to the Washington Capitals for a 2009 second round pick on trade deadline day wasn't a complete shock but I must admit that getting a 2009 2nd rounder (Anaheim's pick to boot!!) was a disappointment. Needless to say, Gainey is taking a huge risk by trading his veteran goaltender and appointing Carey Price as the #1 netminder with the Eastern Conference wide open for a Stanley Cup berth.

I believe Price has shown he can handle pressure situations with a WJC and Calder Cup championships on his CV. He has accomplished more at the tender age of 20 years old than Huet has in his 10 year hockey career. Can Price handle the pressure cooker of Montreal and win a playoff series or dare I say the Stanley Cup? I certainly think he has the pedigree to do well but time will tell. Gainey will take the heat if Price or Halak (another very good goalie in the Habs system) can't carry the load down the stretch.

Cristobal Huet has struggled in his last four games and the stats don't lie (1-3, 4.50 GAA, Sv% of.859 in last 4 GP) with Gainey stating that the organization would not re-sign him at the end of the season.

I believe Gainey had no choice but to trade Cristobal Huet to get something in return and allow Carey Price to start his promising career with the Montreal Canadiens........Gambler Bob is certainly hoping to cash in his poker chips with Price's success and a long playoffs run!!!! - All Habs

I believe the Jackets were a better team with Fedorov in the lineup, but it was more an intangible thing than anything else. Perhaps he survived more on his legacy than 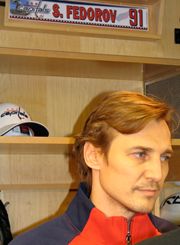 his current actions. However you slice it, though, paying that much money for a marginally interested guy who’d missed 15 games due to injury this year, and has produced 28 only points in 49 games was a cement block of a contract. Now… it’s gone.... Good move for the Jackets to get something (however unproven at this point) for what would have been nothing in less than two months. - End of the Bench

I think it was a good move for both of the teams, the Caps gained a veteran center who can make plays. The man has three Stanley Cup rings, he may be aging but, I think he has what it takes to help the Caps make the push; whether it's his veteran experience and voice in the locker room or if it's him winning some faceoffs for ya. The Blue Jackets gained a stay at home blue liner prospect, whom I'm sure will be good in the future. (He's close to home at Notre Dame so I plan on going to see the kid play). - Bethany's Hockey Rants

I don't think the trade is particularly important for either team. The Canucks got rid of a player they did not intend to re-sign and picked up a player with some upside on a reasonable contract for next year.

Cooke had been with the Canucks for a decade so most fans are a little sad to see him go. He's an "energy" player which means that now he plays for somebody else he's a dirty cheapshot artist. He first came to the Canucks during a particularly dark time. This made him a fan favourite from the start. Watching Cooke run around trying to decapitate people was a guilty pleasure during the Messier era.

On the other hand, I have an emotional connection to Matt Pettinger, too. Matt moved to Victoria as a young teenager and because he is close in age to one of my sons I watched him play minor hockey on Vancouver Island. I've been following his career ever since, so I'm delighted to see him get a chance in Vancouver. I love his speed and I look forward to seeing how well he does.

I don't expect either Matt will make a huge difference on their new team but if Cooke had to go, I'm glad Pettinger came back. - Tom Benjamin's NHL Weblog

From an on-ice perspective, it was hard to react too much as I don't know too much about Pettinger. From what I've read so far, this is probably a lateral move for us.

You guys will love Cooke. Other teams will hate you, but I think you'll love the style he brings. He's a pest and he hits everything in sight.

Off the ice, I think Washington fans will quickly warm up to him. Simply, he's a community guy. He's very well-know outside the rink and spends a lot of time at Canucks Place and various other charities. - Canucks Hockey Blog

[Cooke]'ll make an equal amount of big hits and borderline legal hits.
He'll raise his elbows quicker before he'll drop the gloves.
He'll get clutch goals at key times and no goals in twenty games.
Once upon a time he filled in for Bertuzzi, but this year he was fighting for ice time with Isbister.
If someone touches Ovechkin, you'll see Cooke be Cooke.
If you see a poor hooking call with time winding down in the third, you'll see Cooke being Cooke.
You'll love him and you'll hate him, but the bottom line is he gives it his all on the ice and can change a game with his style of play.
And Vancouver will miss him because, good or bad, you'd rather have a guy like Cooke on your side then play against him. Any day.

...and I can only hope this Pettinger guy can help fill that hole now.
I'm not holding my breath :) - The Yankee Canuck

Did somebody say Ice Girls?!... Another take on the Huet deal.... Here's a tidy run-down of all of Tuesday's deals.... Even an Edmonton journo has to admit that the Caps were winners on Tuesday.... When 22nd is an upgrade.... Memo to Ted Montgomery: You're kind of a dick.... A goal and three helpers for JGod.... Finally, one year ago today was the day after Deadline Day and we recapped another Caps loss and two years ago today we welcomed back the NHL and looked into the ugly world of Laybergerism, err, "borrowing" from bloggers.