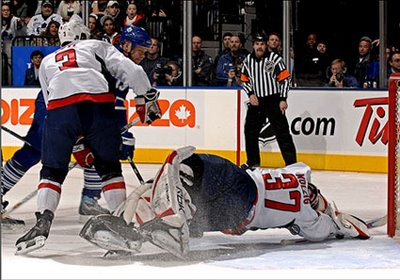 We're going to try our damnedest not to pile on. Really.

Eh, it's just not possible: if Britney wants custody of her children, she's going to need to learn how not to behave in front of a judge. We joke, of course, because if we didn't, thinking about the Olie Kolzig rebound that led to Mats Sundin's game-winning goal – with 29.2 seconds remaining in the game – would drive us to pull out our eye teeth.

Hyperbole aside, one wonders if the late game meltdown by Kolzig will lead to a loss of confidence not only by him and Bruce Boudreau, but by his teammates as well. (Interestingly, no players are quoted about the play in Tarik's WaPo story.) With Brent Johnson getting the start Thursday, and the upcoming 4-day All-Star break, Olie will be living with this game for at least a week.

Nearly as maddening as the rebound, was Alex Semin's play during the Leaf's rush. His defense was, well, indefensible. Is he really the player you want on the ice in the final minute of regulation in a tie game on the road?

Enough with the ugly. On to the good.
The Air Canada Centre was Nassau Mausoleum North last night; filled with resigned, despondent Leaf fans. (The first "Go, Leafs, Go!" chant wasn't heard until well into the 2nd period.) Game 1 of the second Cliff Fletcher era saw timely goaltending by Vesa Toskala and patient team defense. We'll see if the Leafs can maintain that defensive discipline tonight against a Caps team that has yet to lose back-to-back games under Boudreau.

More power rankings love for the Caps....Alain Vigneault is not a fan of the Beech. Washington Hershey is. Again....The DC DMA is watching the Caps on TV....An 8-4 barnburner last night at the CHL Top Prospects game....Army, Air Force players to be mic'd up and heard live by viewers. "Let's go boys!"