With this afternoon's overtime game-winning goal, Mike Green is once again alone atop the list of NHL defenseman in goal-scoring and shooting percentage (minimum 75 shots on goal), and tied for the NHL lead among all skaters in overtime goals. He had a team high 27:46 of ice time, doled out three hits, chipped in with a couple of helpers, finished with a plus-one rating and almost made people forget about getting abused by Andrei Kostitsyn early on.

Question: is there a better trio of players under the age of 23 in the entire NHL right now than Green, Alex Ovechkin and Nicklas Backstrom? The trio now has 33 goals (including five game-winners) and a whopping 67 points in the 21 games since Bruce Boudreau took over. 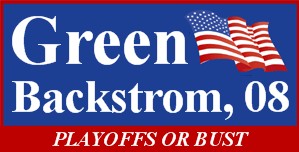