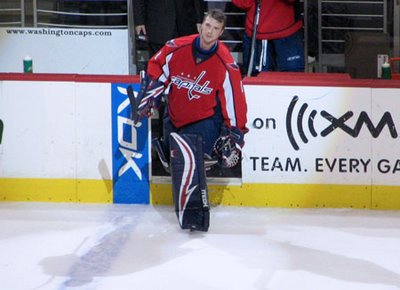 A visibly tired Caps team did all of the little things right Thursday night, beating the Leafs 2-1. Heading in to the All-Star break, the Caps are now just three points away from the final playoff spot in the Eastern Conference, and one point behind Carolina for the Southeast Division lead. (Curiously, the Caps were in a similar position at the break last season: three points out of the eight spot and behind first place Carolina, by nine points.)

And in your daily update on Capitals-related grooming habits, Olie Kolzig's beard is no more. You were dead-on, anonymous commentor from yesterday. Or should we call you Nostradamus?