US And Russian U-17s Drop 'em In Dmitrov

Share All sharing options for: US And Russian U-17s Drop 'em In Dmitrov 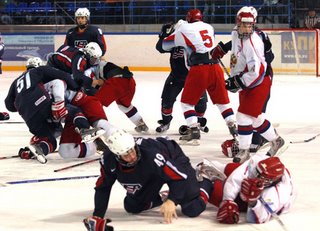 Unlike JP's earlier account of a fictitious scrap at Kettler, it turns out there actually are hockey-related fisticuffs involving Russians to report. From Southern Bohemian Ho(c)ke(y)j,

The under 17 Four Nations Tournament, which was held in Dmitrov, Russia ended with a bench clearing brawl Sunday afternoon. After the final whistle of the Russian´s 2-1 win (thanks to 2 power play goals) over team USA, several players on the ice started fighting, eventually leading to both teams emptying their benches. According to the tournament´s organisation the blhttp://www.blogger.com/img/gl.link.gifame should be on team USA, whose players also refused to participate in the after-game ceremony.

As Vakfan mentions, the brawl is strangely missing from USA Hockey.com's game coverage. (The KGB would be proud.)

Russia and the U.S. could next meet December 29th, when the World Under-17 Championship is scheduled to begin in London, Ontario.

Update: A heavily (and strangely) edited video clip of the game is now available on this Dmitrov TV station's website.