Thanks to the indispensable Inside College Hockey for pointing us to a bit of news regarding University of North Dakota blueliner and 2005 Caps first-rounder Joe Finley.

It seems that Finley's Fighting Sioux and the University of Wisconsin (the numbers one and five teams in the nation, respectively) had a fairly rough-and-tumble series in Madison this past weekend, with much of the attention focused on Badger super-frosh Kyle Turris (the third overall pick in this past summer's Entry Draft). As the Wisconsin State Journal describes it:

"In the first period of the series opener Friday, won 4-0 by UW, Turris was walloped at the offensive blue line by Fighting Sioux junior defenseman Joe Finley, a fellow NHL first-rounder (Washington) who is listed at 6-foot-7 and 245 pounds.

"Things escalated in the second game, which saw North Dakota gain a split with a 3-1 victory. Winger Max Watkins thumped Turris in the neutral zone, Finley literally tackled Turris along the right boards, senior defenseman Robbie Bina put a headlock on Turris in the corner and junior center Rylan Kaip made a point of trying to drive Turris to the ice during every faceoff."

But while Big Joe may have been done, um, badgering Turris, his weekend wasn't quite complete. After the second game, Finley apparently went Jeff Gillooly on UW's mascot 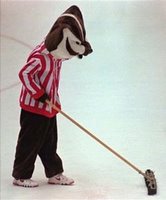 "[A] UW official confirmed that Finley allegedly used his stick to smack Bucky Badger in the leg when the two passed one another on the runway to the dressing rooms Saturday night."

Beating up on a future NHL superstar is one thing, but Finley had better be careful or he might just find himself with the last thing anyone needs - a pissed off Sandra Oh.

Update (11/14): Finley has been sent to the principal's office and the verdict is in - Big Joe must write a letter of apology to Bucky Badger. Seriously.