The preseason has come to an end with a 2-1 loss at the hands of the Ottawa Senators, but from all accounts, there were plenty of positives to take away from the game, namely the chemistry displayed on the top two lines, and the work in the faceoff circle (can Dave Steckel really get cut after winning every single one of his seven faceoffs?).

So how do the final cuts shake out? Corey reports that Jeff Schultz has all but made the team, and there's nothing but speculation past that for the last few roster spots. But there is this tease from Vogs: "It wouldn't shock me at all if I were to come off the course [at the Caps charity golf tourney today] to news of another deal on tournament day this fall." My money's on Clymer for a fourth round pick, but feel free to speculate in the comments.

One thing's for sure, however - these three guys will be in red, white and blue Friday night in Atlanta: 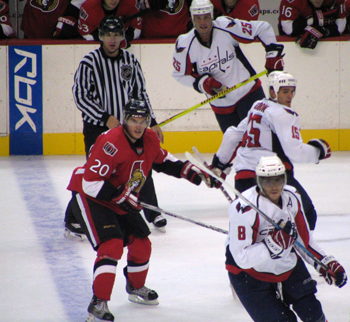