Well, the National Capital Region sure is doing its part to make the Canucks feel right at home, as the forecast calls for a cool, rainy day. Hell, The Tragically Hip are even in town. Let's hope the Caps are a little less hospitable when they welcome Vancouver to the VC for tonight's game.

With Vancouver comes one of the Caps' old nemeses, Roberto Luongo. For his career, Bobby Lou is 14-9-3-0 against the Caps with a 2.14 GAA and a .933 save percentage, and he has shut the Caps out twice in 26 career starts. In his only start against the Caps as a Canuck, he held the boys from D.C. to two goals on 21 shots in a shootout win almost exactly a year ago today (more on that game in a minute), this on the heels of a 2005-06 season in which he simply manhandled Washington (to the tune of 7-0-0, 1.96, .949) as a member of the Florida Panthers. In fact, Luongo has won his last nine decisions against the Caps, and Washington hasn't beaten Vancouver since the 2000-01 season. Tonight would be a great night to kill two monkeys with one hammer, wouldn't it?

Back to last year's game between these two teams - if you don't remember it, take a quick glance at the AP's recap and/or the following day's Rink Roundup to refresh your memory. Vancouver outshot the Caps 44-21 on the night, including a combined 31-3 in the first and third periods (!), and Alex Ovechkin had a Sidney Crosby Hat Trick (goal, assist, diving minor). Needless to say, if it wasn't for Olie Kolzig that night, the Caps would have left the Pacific Northwest without a point (and likely without much pride).

That was then and this is now, as they say, and this is a Canucks team that has struggled mightily to get their offense on track in the early going, scoring a handful of goals on a pretty efficient power play, but ranking dead last in the League in shots on goal per game (no thanks to stretches like the second period against Columbus last week in which they didn't register a single shot on goal).

But, as the Minnesota Wild are showing on a nightly basis, you don't need to score big to win games in the NHL. Which brings us back to Luongo who has been, well, average to date. Twenty-fourth in GAA. Twentieth in save percentage. Those aren't very Louie-like numbers, and when you combine that with a team that isn't scoring, you get a 4-win/6-loss squad that comes into Washington in need of a win. Big time. 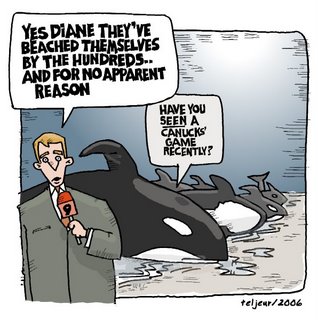 As for the Caps, with back-to-back games this weekend (the team heads to St. Louis for a Saturday night game with the Blues), it'll be interesting to see which goalie starts which game. You'd think Olie would get the home game Friday and Brent Johnson would play Saturday night against his former team (and the only NHL team he's never faced), but you never know when Glen Hanlon will play one of his hunches.

Speaking of goalies and former teams, as you probably know, Hanlon broke into the NHL with the Canucks after being picked by Vancouver in the third round of the 1977 draft. In parts of five seasons with the club, he posted a 43-66-21 record with a 3.56 GAA and looked damn fine while doing it (and even better starting at around the 3:55 mark of this video).

Anyway, on the morning of the last game of this four-game homestand, the power play still stinks, the penalty kill seems to be on its way back (thanks, Boyd) and the Caps will try to salvage a .500 record over the four games with a win tonight against a goalie that owns them who's playing for a team that isn't scoring goals. This game has 2-1 written all over it - hopefully the good guys come out on top.

Why The Canucks Will Win:

"As much as they are trying to redefine the word 'suck' these days, the Canucks will still school the Caps tonight based purely on the math involved:

- Swedish Twins > Singular Russian
- A properly made waffle > Tom Poti
- LuonGod > Godzilla (who mind you can barely beat a moth. Go check IMDB.)
- Our uni's have our name on it > scared to admit where you live

Rather then getting angry at the inevitability of your loss, just say 'thank you Vancouver for Donald Brashear, Brent Johnson, Glen Hanlon and for taking Luongo out of our division' and in return we won't unleash the full force brunt of Hell's fury on you (otherwise known as Brad Isbister on four red bulls and a bag of Pop Rocks). Can you hear me now?" - The Yankee Canuck

"Surely, the Canucks can't keep playing as horrible as they have in the last week. Not with Luongo finally finding his form and all top-six defensemen finally healthy and in the lineup. Besides, with so many fans jumping off the bandwagon, it's time the team does something to reel them back in. - Canucks Hockey Blog

"The Canucks will win if they finally figure out that the season has started. If not, they won't." Canucks Corner

Did You Know: Canucks forward Rick Rypien (who is day-to-day with a hand injury) is a cousin of Redskins Legend-for-a-Season Mark Rypien.... Karl Alzner will lead the WHL stars against the Russians, much like his fellow QMJHL Caps prospects will do for their league.... On this date back in 1983, former Miracle-on-Icer Dave Christian scored his first of 193 goals for the Caps.... Matt at Battle of Alberta has some fun wondering aloud who a potential trade partner would be if the Flames were to move Miikka Kiprusoff.... Rick Nash is a beast right now, and scored a gorgeous goal last night on a shot I've seen AO try a few times.... Finally, if you didn't see last night's Zdeno Chara/David Koci fight (and you don't get squeamish at the sight of blood), check it out here. Nice call by Jack Edwards, too.