Not much in the way of recaps of last night's action (which featured few regulars and no official stats), so read Vogs' and move on.

Tim Leone shares Caps blueline prospect Patrick McNeill's NHL role model with us, Tarik profiles Mike Green and Corey takes a look at Tom Poti - I guess it's D-day. The Lebanon Daily News says to expect at least three more cuts from D.C. on Thursday, and believes the Caps will open the season with 13 forwards and 8 defensemen on the roster. Oh, and E.J. Hradek's got the Caps finishing in the Southeast cellar while his buddy at the Worldwide Leader, Scott Burnside, has them doing a bit better.

Finally, they may not have published the stat from last night's game, but I'm pretty sure that this earned Donald Brashear five for fighting and Riley Cote five for receiving: 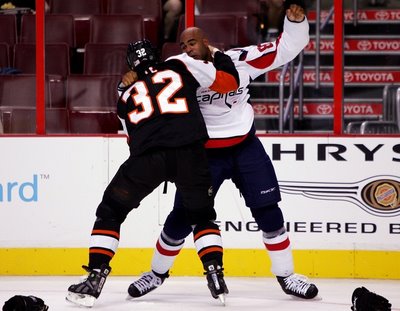