Jesus Saves And Walter Scores On The Rebound

Share All sharing options for: Jesus Saves And Walter Scores On The Rebound

Being Sunday, I figured it'd be as good a time as any to bring religion to the masses. No, I'm not going to proselytize (my sabbath was yesterday, anyway). I'm just going to pass along a story about a former Cap and his religion, courtesy of the Montreal Gazette.

The story is about Ryan Walter - a key component of the most important trade in Caps history - and a team flight back in 1980:

"We had an airplane over top of New York that dropped for three or four seconds," Walter, 49, recalled in a telephone interview. "It's funny, because on that airplane all the big guys and the social conveners who usually sit at the back of the plane thought we were going down and for the 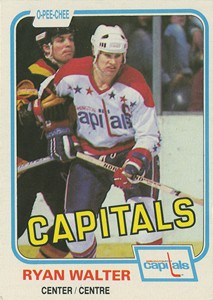 first time in their life they called out the name of Jesus. For the first time, probably in their life, it wasn't a swear word in the dressing room.

"I got off that plane thinking, 'Gee, is life all about goals and assists and winning Stanley Cups?' " Walter added. "If the plane goes down, can you really know that you're going to spend eternity with the creator? That really began my search for looking at the scripture and the new testament and just really trying to understand what is the spiritual dimension that I feel in my life."

A true Christian-athlete was born ... again.

Walter's is an interesting story, and he continues to "inspire the hungry spirit" today as a leadership coach and motivational speaker. It's easy to mock religion and the athletes that constantly refer to theirs, but Walter didn't win a Cup until after he found Jesus, so who's laughing now?

My hungry spirit inspired, if you don't mind, I'd like to close this post with a prayer: