Share All sharing options for: Did You "C" That?

Watching the Colts/Saints game last night, I noticed that Peyton Manning had a "C" with four stars on his uniform (yes, it's apparently Fashion Week here at The Rink).

"That's sweet," I thought to myself, "the team must be honoring some recently-deceased high-ranking general whose surname began with the third letter of the alphabet." But Manning was the only Colt wearing the patch. Hmm.

Then I saw a similar patch on Saints quarterback Drew Brees. No. 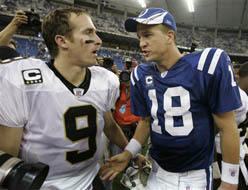 On the heels of their shameless rip-off of a popular NHL television ad, the NFL has decided to put a "C" on team captains' uniforms. But wait, there's less! Not only are the uniform "C's," uh, uniform (i.e. no team-to-team customization beyond colors), but the white stars will actually be changed to gold stars for each year the player has been captain (if the NHL did this, Joe Sakic would have 18 gold stars).

So while the NFL is busy handing out gold stars to quarterbacks like fourth grade teachers to perfect spellers, rest assured that the NHL must be doing something right.