I didn't get a chance to listen to much of today's 4-3 loss to Carolina, but considering that the Caps sent only two of their putative top six forwards (Chris Clark and Nicklas Backstrom) to Raleigh to face a 'Canes team that dressed Eric Staal, Erik Cole, Justin Williams and Cory Stillman (among others), I'd say that an overtime loss in which Brent Johnson didn't give up a goal in his two periods of work probably indicates a pretty good effort from the under-manned visitors. 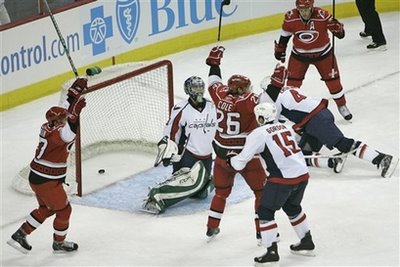 Check out Corey and Tarik (including a great quote from Karl Alzner) for more, but here are some quick notes from a glance at the score sheet:
Photo: AP