Now That Looks Better, Doesn't It?

Share All sharing options for: Now That Looks Better, Doesn't It?

Remember the depth chart we were playing with on Friday? Needless to say, it looks a little different today (below). And that ~$28 million salary number? Even counting all twenty-six players in blue (and operating under the same assumptions we used last week), the total is only $38,671,305.60 - way south of the midpoint on the salary spectrum.

What's most encouraging to me is that GMGM et. al. have put together a team that, on paper, should contend for a playoff spot without having to move a single asset (bodies or picks) and with plenty of cap space to play with, should the need arise. 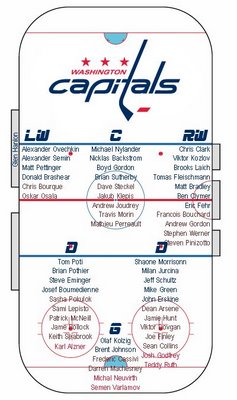 I don't think the Caps are done wheelin' and dealin' yet, but you can see that something's gotta give, roster-wise, especially down the right wing and on the blueline. So who stays and who goes?

Right wings
Locks for the roster: Chris Clark, Viktor Kozlov
Tradeable assets: Eric Fehr, Tomas Fleischmann, Brooks Laich
Other: Ben Clymer, Matt Bradley
Quick analysis: Given Fehr's health, Flash is likely the most attractive of the group to potential trade partners. His gaudy AHL numbers (114 points in 102 regular season games and 52 points in 39 playoff games over the past two seasons) and the fact that he just turned 23 would put him in high demand as trade piece, regardless of what he's been able to accomplish so far in his NHL auditions. Then again, this team isn't developing players for other teams, so it would surprise me to see them move more than one or two top prospects just as they're about to hit their primes. Laich's versatility and grit are great assets, but with the emergence of Boyd Gordon, Laich's services might be somewhat redundant in D.C.

Blueliners
Locks for the roster: Tom Poti, Brian Pothier, Shaone Morrisonn, Milan Jurcina
Tradeable assets: Mike Green, Steve Eminger, Jeff Schultz
Other: John Erskine, Josef Boumedienne
Quick analysis: Green and Schultz could be sent to Hershey without clearing waivers (though I think it more likely that Schultz will make the team), Boumedienne might very well head back to Sweden, and Erskine will spend many a night in the press box. Despite being a favorite scapegoat in certain circles, Eminger still has plenty of trade value, but may get the change of scenery he might very well need to get his career back on track.

Frankly, I'm happy with the group of rearguards currently on the roster. In fact, I'm pretty happy with the roster overall. But if the Caps are to make another move this summer, it will likely be for a shut-down defenseman. What kind of blueliner do you think they can get for Eminger, Laich and a second-round pick in 2008?