Is Kevin Lowe Trying To Get Fired?

Share All sharing options for: Is Kevin Lowe Trying To Get Fired?

I'm not trying to pile on here, but what the hell is Kevin Lowe doing in/to Edmonton? Let's put it this way - if Lowe worked in the current Bush Administration, he'd have been awarded the Presidential Medal of Freedom by now. Here are a few of the Oiler GM's recent head-scratchers:
Now, I'm admittedly an outsider looking in on the situation and have cherry-picked some less-than-favorable examples to make my point. But that point still remains - Kevin Lowe has made some questionable moves of late, and Edmonton Oiler fans deserve better.

Update: I just saw an explanation for the Rourke trade that makes sense, and that is that the Oilers needed to acquire that 3rd round pick - which had originally been there and was sent to the Island as part of the Marc-Andre Bergeron trade - in order to have the right picks so they can make an offer to a Restricted Free Agent. Maybe Lowe knows what he's doing after all.

Update: The Oilers have signed Sabres RFA Thomas Vanek to a 7-year/$50-million offer sheet. If the Sabres don't match, not only will the Oil be on the hook for $7+ million per year for the next seven years, but will have to compensate the Sabres with four first round picks as well.

Update: The Sabres match. Who's next up for Lowe? Zach Parise? Dustin Penner? What's Plan C?

Update: As of 1:30, here's the first graf of Lowe's Wikipedia entry: 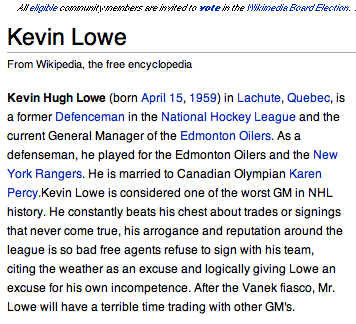