That Other Golf Open Going On This Weekend

Share All sharing options for: That Other Golf Open Going On This Weekend 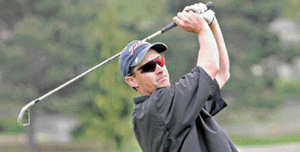 Following up on JP's recent post on Matt Pettinger caddying in this weekend's Times Colonist Open in Victoria, BC, the final scorecards have been signed and Pettinger's chum, the current BC Amateur champion Bryan Toth, didn't fare too well. He tied for penultimate place.

Pity that his Amateur status prevents him from collecting his prize money: $300. Canadian.

An unrelated question: Which unfortunate, unoriginal exclamation by drunky sports fans will we see disappear first? Hockey fans who bellow "Ohhh!" during the National Anthem at Caps games or golf fans who feel the need to shout "Get in the hole!" after every putt?