Share All sharing options for: What They're Saying: The Caps' 2007 Draft

With ten picks in this weekend's NHL Entry Draft, the Caps were a busy bunch. Below is a recap of who they picked (click on the image to enlarge it), and a collection of comments on the Caps' 2007 Draft generally (and the draftees specifically) from around the hockey world. Check back often, as this post will be updated as needed. 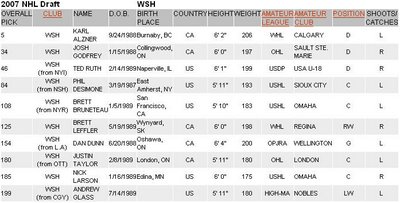 The Good
In Karl Alzner (fifth overall), the Caps got the consensus best defenseman at the draft. They used all three of their picks in the top 46 to snag rearguards, shoring up that position for years to come.

The Bad
Their second-round pick (34th overall), defenseman Josh Godfrey, is very one-dimensional. Every team needs a power-play quarterback, but Godfrey cannot be a defensive liability in the NHL.

Worth Noting
Drafting high-school kids is always a boom-or-bust endeavor, but the Caps did it at the right time. They used their last two picks on them. Center Nick Larson was selected 185th overall and left wing Andrew Glass was chosen 199th. Larson in particular has a ton of offensive potential; it just needs to be seen against stronger competition. - Forecaster

In the 2007 NHL Entry Draft, the Washington Capitals continued to look towards North American defenders, with some gifted forwards later on. Character and leadership were the common denominators among them. The Capitals also traded down a number of times to gain extra draft picks in what is expected to be a very strong 2008 draft. - Hockey's Future

No question about it, Calgary's Karl Alzner is the consensus top-ranked defenceman this year and if he's not the first defenceman chosen in the draft, it's going to come as a surprise to many. But having said that, the praise for the rangy blueliner is somewhat muted. That's because he's not really a high-end offensive defenceman, nor is he a big, physical bruiser or a defensive presence. "He's one of those guys who does everything pretty well, but nothing is necessarily excellent or over the top," one scout said. Alzner is described by some a true modern-day defenceman, whose ability to play strong positionally and whose stick-on-puck, stick-on-stick game is good. He also gets shots through from the point. While the odd scout has Alzner outside of the top 10, most have him there solidly, if not in the top five, and we know of at least two teams who rate him as the third best player available in this draft. - TSN

A skilled stay-at-home defenseman with good skating ability. Is calm under pressure and composed with the puck. Has good positioning and reads the play well. Has a strong shot from the point. Wins battles along the boards and in his own zone. Needs to improve his acceleration and his ability to change tempo throughout the game. - NHL Central Scouting

Alzner has emerged as a legitimate top 5 candidate for the 2007 NHL Entry draft. A tremendous World Junior camp got him named to the team. He was the seventh d-man. The quiet type who continues to make the difficult plays look easy. He is noted for his outstanding poise and ability to make plays in each zone. He is very skilled and handles the puck with confidence. Would like to see him take more risks offensively and carry the puck but rarely chooses to do so. Is capable of playing physical but needs to demonstrate this on a more regular basis. Overall, an outstanding, well-rounded player who is a definite leader for Calgary. - ISS

He’s quite capable of generating offence as his statistics will testify. Eight goals and 39 assists in 63 games this season easily surpassed his total from his sophomore season. He just doesn’t like to gamble, a trait that is sure to endear him to any of his future coaches. - ISS

He comes with a lot less fanfare than [last year's #1 pick overall, defenseman Erik] Johnson, but Alzner has the makings of a quality top-four defenseman at the NHL level.... Alzner's poise with and without the puck is an attribute that stands out above the crowd.... He has been compared to the likes of Ottawa Senators defenseman Wade Redden for his smooth ability from the back end, though Alzner projects as a more physical, less productive version. He's going to be a good one. - The Hockey News

This year's blue line brigade boasts one high-end talent in Karl Alzner... He brings size, intelligence and a calm presence on the blue line. He ranks right up with Mark Katic as the best passing defensemen in the draft — Alzner's crisp outlets are always right on the tape and he sees the ice very well. He's the type of guy you can safely pencil in as a first pairing d-man for the next 10-12 years.- Kyle Woodlief, Red Line Report

He’s a big defenseman who is a good skater and has a good head on his shoulders. He thinks the game through very well. He can move the puck, and is a good, solid two-way defenseman. He has some offense in his game and is going to be a big solid blueliner. The only question is, what is his top end and how high is he going to get? He’s going to play because he’s smart, mobile and has a good stick. He’s a very solid prospect. - Philadelphia Flyers Director of Hockey Operations Chris Pryor

Alzner is a very polished skater, and he plays a very solid, sound game. There's not a lot of risk with the game he plays. You'd like to see him work that out more in the junior ranks -- to take a few chances, push his envelope a little bit -- but he's just not that kind of player. - Anonymous NHL Scout

[C]learly the top defender in this year's class because of the completeness of his game and the general assurance he will become a very good NHL defenseman without much "bust" potential. He understands the game and does all things very well, thus should be a very high pick. - ESPN

In Alzner, the Capitals have not just a potential No. 1 defender of the future, but someone who could easily become a fan favorite in the years to come. - Hockey's Future

[T]he best in the OHL when it comes to accurately slapping a rubber saucer. - Osprey News Network

Any team interested in drafting him in June knows they will be getting a character player that has a good chance of developing into a vital asset for the franchise. - NHL.com

A stay-at-home defenseman with good mobility. Has a good wrist shot from the point that gets through to the net. Plays the body hard and hits with authority. Quick to get to the puck in the corner and strong one-on-one. - NHL Central Scouting

Ruth's character is off the charts. Ruth possesses all of the necessary skills to become an NHL defenseman, but we believe his work ethic and leadership are what will guarantee his success in the NHL. - ESPN

Dunn is already 19 years old and still playing Tier II in the OPJHL, but has plenty of athleticism and good reflexes. - Kyle Woodlief, Red Line Report

He's raw, but has a lot of great tools that he's just learning how to harness. Could make a very rapid ascension up the charts if he accelerates the learning curve. - Kyle Woodlief, Red Line Report