That's the range (inclusive) in between which every NHL team's salary cap will fall this coming season.

Where does that put the Caps, you ask? Based upon our trusty depth chart from the other day (below; we're only counting the players in blue plus Eric Fehr) and a couple of assumptions (namely that RFA's accept their qualifying offers and that Nicklas Backstrom's base salary of $850,000 is what counts against the cap, as opposed to the $2,200,000 he'll make if he hits all of his incentive benchmarks), the Caps have a 2007-08 payroll of around $27,796,305.60*.

Now, that number is likely low (Milan Jurcina, for example, will likely eventually sign for more than his $550,000 qualifying offer), but it gives you an idea of where the team stands right now, which is important because if they're going to end up somewhere around the middle of the salary cap range, they'll have to add around $14.5 million in salary to the current roster (and that doesn't even factor in the subtractions that will occur when guys like John Erskine and his $632,500 salary are removed from the equation).

So what should we expect? Ted Leonsis says that the Caps are "going to have to add three or four new players through trades and free agency.... [General Manager] George [McPhee] needs to improve the team now[.]" 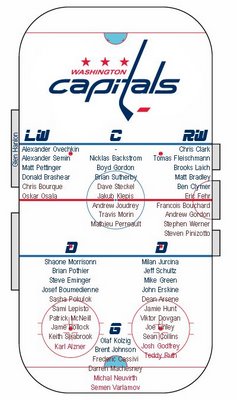 * The $3,515,000 are still paying good ol' what's-his-name for this season doesn't count against the salary cap, but may be a factor in the team's internal budgeting.