How The Sabres Got Screwed - Instant Reaction

Share All sharing options for: How The Sabres Got Screwed - Instant Reaction

Here's presumably the best shot the video replay officials had of the goal/no-goal in question: 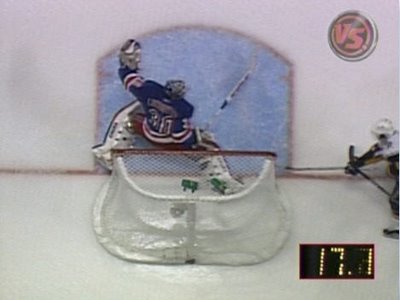 The puck appears to be right up against the line in that shot (and actually goes further towards the back of the net, though obscured by Henrik Lundqvist's pad). But since the camera is not directly above the goal, you don't even need to make the assumption that it crossed fully in the next frame. Look at these two pics - the puck is in the same exact position in each shot, but the first picture is taken from an angle similar to the goal cam and the second from directly above:

As you can tell, the slightest change in camera angle tells a very different story of the same situation. I understand that the reviewer must see "conclusive evidence" that the puck has crossed the line (i.e. white between the puck and the goal line), but how can the combination of the screen cap above, the fact that the puck continues to move forward after that, the angle of the overhead camera and a simple understanding of spatial relationships and the laws of physics not combine to form conclusive evidence?

On a somewhat-related note, how expensive could it be to have pucks with RFID chips in them and sensors along the goal line (and it's a lock that you see an article on that topic within the next 36 hours)? For that matter, how expensive would it be to have super slo-motion cameras like they have at so many other sporting events (is it a question of in-house versus for-television production)? Something after the freeze frame and before the puck disappears under Lundqvist's pad would have been nice.