Share All sharing options for: Great Moments In Hockey Journalism 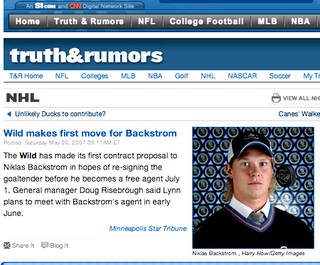 The Wild have offered their free agent-to-be Finnish goaltender Niklas Backstrom a new contract, and CNN/SI has attached a picture of Caps Swedish center Nicklas Backstrom to the story.

It's not the first and it won't be the last time that the MSM gets confused by the similar names of these two Scandanavian studs, and it's not nearly as bad as today's biggest MSM hockey screw up. That honor belongs to our very own Washington Post, whose print edition this morning ran the following:

Trailing by one entering the final period, Ottawa wins the Stanley Cup finals opener on a goal by Travis Moen. E2

Well done, WaPo! Look, you don't have to send your hockey guy to the Finals, but pretend you care just a little bit about the sport, won't you?

H/t to JT on the Backstrom link