The Curse Of The Caps 14

Share All sharing options for: The Curse Of The Caps 14

With the recent news less-than-surprising revelation that Caps' top right-wing prospect Eric Fehr still has not skated since late February due to a wonky back (and is "nowhere close" to getting back on the ice), one can't help but wonder if this is going to be the kind of injury that will linger and dog Fehr throughout his career. If it is, the former Western Hockey League scoring champ may have no one to blame but himself. You see, it seems as though the number 14 for the Washington Capitals is [cue eerie music]... cursed!

Here's a run-down of all the players to ever wear the number for the Caps and the ill-fates with which many of them met: 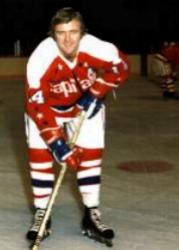 ed the Capitals in scoring in their inaugural season with 22 goals and 36 assists (and a woeful minus-48 plus-minus rating). He retired after playing just 34 NHL games the following year and died prematurely at the age of 51 some 16 years later.

Gerry Meehan (1975-79) - Meehan tallied 65 goals and 79 assists in 208 games for some pretty miserable early Caps teams before retiring... and becoming a lawyer (frightening!).

Antero Lehtonen (1979-80) - Despite apparently being pretty sweet back in his native Finland, Lehtonen didn't play a single game in the NHL after taking off the Caps' #14 for the last time.

Dwayne Lowdermilk (1980-81) - An "offensive minded blueliner who put up big numbers in junior and enjoyed a solid minor pro career," Lowdermilk played both - yes, both - of his NHL games for the Caps wearing #14. 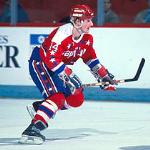 Gaetan Duchesne (1981-87) - You know the story on Gator (pictured), who tragically passed away just a couple of weeks ago at the age of 44.

Dave Tippett (1990-92) - In the past four seasons, the Tippett-coached Dallas Stars have been one of the best teams in the NHL in the regular season, but have won only one playoff series. It seems as if the Marty Turco excuse is gone after this year, so that leaves the curse as the best reason I can come up with.

Kevin Miller (1992) - The trade that sent Dino Ciccarelli to Detroit for arguably the least-talented K. Miller was one of the worst in team history, as the Caps got 10 games and no goals out of Kevbo (I guess the curse was on the team, not the player on this one, as Miller actually went on to have three 20-goal campaigns after leaving D.C.).

Paul Cavallini (1992-93) - Oddly enough, Cavallini was acquired for a second tour of duty with the Caps from the St. Louis Blues in exchange for the forementioned Miller. One season wearing the ol' X-I-V, five goals and off to Dallas.

seemed to be headed for a long and productive NHL career until, as Mirtle describes it, he "was chasing down a puck, trying to beat an icing call during the 1996 playoffs when he tripped and collided feet first with the end boards, shattering his right heel. Doctors claimed they had seen an injury of similar severity only in construction workers who had fallen from high rises." Patty would only play eight NHL games thereafter, retiring at 25-years-old after shredding the tendons in that same right ankle.

Patrik Augusta, Patrice Lefebvre (1998-99) - The fact that both of these guys wore the same jersey number in the same year (they should have just stitched "Pat" on the back and saved some time) tells you most of what you need to know, a combined seven career NHL games and no NHL points tells you the rest.

Joe Sacco (1999-02) - Known to Caps fans (at least to this one) as Joe Sucko, the speedy winger scored 14 goals in 213 games for the Caps, but none in 65 games in his last season in D.C. In fact, he only scored one more NHL goal after leaving town, meaning he was goal-less in at least his last 99 career NHL games.

Kip Miller (2002-04) - Miller was brought in as part of the "Washington Penguins" movement of the early 00's, but was unable to keep you-know-who happy. Miller hasn't played an NHL game since leaving town, but did lead the AHL's Grand Rapids Griffins (of Bruce Cassidy fame) in scoring this year. Impressed? Me neither.

Which brings us to Fehr. The Caps have understandably high hopes for the young winger, but are undoubtedly concerned about his current injury, an injury that might have been avoided... had he just chosen another number.