Anything To Sell A Stick?

Share All sharing options for: Anything To Sell A Stick?

Want to stand out in a crowded market place? Head for the gutter. At least that's the strategy Warrior Hockey of Warren, MI seems to be taking.

A newcomer to the hockey equipment business, Warrior has been using images of "pimps... adolescent boys with erections and slang references to marijuana," to sell its products, with taglines like "Get a taste of the bubonic Kronik. Who wants some??!!" to sell its newest stick, the Kronik, according to a Sports Business Journal article (Warrior defends that line, claiming their "thinking was that it makes you a chronic scorer"... uh huh). 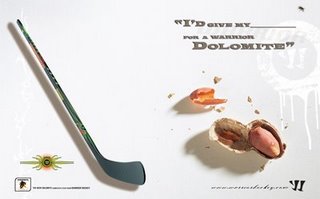 "We are trying to be different in respect to our equipment advertising and overall branding message," said Neil Wensley, Warrior's director of marketing. "Our intent is not to offend anyone, but to increase the audience for the sport."

Am I the only one who thinks the sport is better off without that audience, or do you take an "anything to increase the audience" approach? And why did I just give them this free publicity?