You might recall that way back in my preview for the first game of the season (seems like an eternity ago, doesn't it?), I made some predictions as to how the team and the players would do for the season. Let's revisit those predictions and use them as the foundation for the year in review, the new text following the semi-colons:

32 wins, 39 losses, 11 overtime losses (5th, Southeast Division); The Caps finished the year at 28-40-14, 5th in the Division. I had predicted a small improvement in points (75 total) that didn't materialize, but if people realistically thought this was a playoff team, they were delusional.

Ovechkin, Alexander (53 goals, 54 assists); AO finished with 46 and 46 - respectable, but certainly not the sophomore season he would have liked. Had the team kept Zubrus around for the last month-and-a-half, Ovie probably 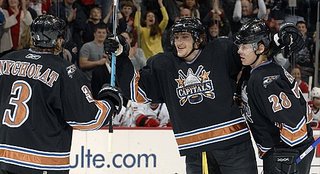 would have been close to the predicted numbers, but with NovoFlop and others centering him, he didn't have much of a chance. Alex had more growing pains this year (his minus-19 rating speaks to that) and the first negative press of his NHL career following the Daniel Briere incident. His roller-coaster season ended strong, however, and with the right pivot, he should be back on track in no time next year.

Zubrus, Dainius (23, 35); I damn near nailed this one, as Zubie ended with 24 goals and 36 assists. He was solid if unspectacular before being traded to Buffalo where he seems to be fitting in nicely as a wing on Chris Drury's line. Zubrus is better-suited to be a winger, in my opinion, because it gives him more of an opportunity to use his size and strength to dig out pucks along the boards. It will be interesting to see what uniform Dainius is wearing on Opening Night 2007.

Semin, Alexander (22, 26); As close as I was on Zubrus, I wasn't even in the right area code on Semin, who ended the season with 38 and 35. His offense blew everyone away and his commitment to defense was pretty much what was feared. Too many lazy, selfish penalties and not enough distributing of the puck became hard to overlook down the stretch and both will need to change going forward.

Zednik, Richard (23, 22); Zednik played just over half the season and ended up with 7 goals and 14 assists. While in D.C. he was mostly buried on the fourth line and/or fighting injuries. I wouldn't call his second tour of duty in Washington a complete failure, but we all expected a little more from Zed.

Pettinger, Matt (16, 20); Princess tallied 16 goals (winner!) and 16 assists while missing nearly 20 games. Was I predicting those injuries or a drop off from last year? Who knows, but once Petty seemed to finally have two working shoulders, he looked better and after a summer off should be around 20 goals (or more) on the third line.

Sutherby, Brian (16, 17); Missing more than a dozen games, Suts wound up with seven and 10, but did find a bit of a groove in early March before missing the last 10 games with a freak thumb injury. Sutherby is a restricted free agent who will almost certainly be signed and centering the fourth line next year.

Clark, Chris (16, 20); I didn't think Clark would stick on the first line all year, but, for the most part, he did, winding up with a whopping 30 goals and 24 assists. Not a whole lot of his goals were pretty, but they don't have to be. He showed enormous leadership throughout most of the season and ideally will see time on both the top line and the third line next season.

Laich, Brooks (11, 18); I expected a bit more from Laich this year, though by the end of the season he was playing in all situations (including the point on the top power play unit) and had an even or plus rating in each of the last 13 games of the year. 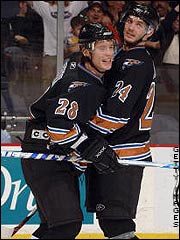 Beech, Kris (8, 14); Beech showed some flashes of offensive ability, but they were few and far between as he wound up with 8 goals (winner!) and 14 assists. His career in D.C. is over.

Fata, Rico (8, 9); Speaking of guys whose career in D.C. is over, Fata had a goal and an assist in 10 games before being cut loose. His career in the NHL is over.

Bradley, Matt (6, 9); Bradley missed time with injuries and healthy scratches, and wound up with 4 goals and 9 assists (winner!). I'm not crazy about Brads, but he's signed through next year, so expect him shuffling between the fourth line and the press box. Maybe the team can buy him out.

Fleischmann, Tomas (5, 9); Flash had four goals and four assists in 29 NHL games this year, with half of that production coming in one game. I would have liked to have seen a little more from him, though the glimpses were, at times, impressive.

Brashear, Donald (6, 5); Brash played his role and, for the most part, played it well. His four goals and nine assists were welcomed, but his beatings of Colton Orr, Aaron Downey and others were memorable.

Fehr, Eric (3, 6); Am I the only one worried about Fehr's back injury? In 14 NHL games, Fehr had a pair of goals and a helper. I would have liked to have seen more of Fehr on a scoring line, or just in general, but his wonky back robbed us of that opportunity.

Klepis, Jakub (4, 5); In 41 games, Klepis had three goals, seven assists and as many hooking minors as AO had shots this season. Next year's training camp might be his last chance to impress.

Gordon, Boyd (2, 3); Muffins was possibly the most pleasant surprise of the season, as he ended up with seven goals, 22 assists and an equally unlikely plus-10 rating. His 52% win rate in the faceoff circle was solid, and he showed that he can match-up against some of the League's top centers and hold his own.

Pothier, Brian (8, 28); Potsy wound up with 3 goals and 25 assists and was the whipping boy for most Caps fans (though Eminger might even edge him for that dubious distinction). Personally, I think Pothier was put in a role in which he couldn't really succeed, and that was the role of Number One defenseman. If the Caps bring in someone and bump Potsy down to a second-pairing type role, I think you'll see a much more productive and capable blueliner.

Clymer, Ben (9, 22); I didn't think the Clymer-as-defenseman experiment would last long and it didn't, as Clymes ended up with seven goals and 13 assists in 66 games before getting injured. He's another guy I'm not crazy about, but is signed for the next two seasons, so I better learn to like him, I guess. His versatility is a plus - he can stink it up at forward or on the blueline. 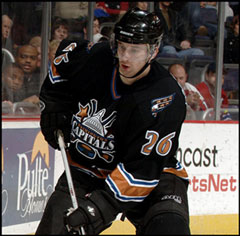 Heward, Jamie (8, 20); Heward ended the season with 6 goals and 18 assists, but the place he was holding no longer needed holding.

Green, Mike (6, 16); Another disappointment on the blueline was Green's progression, as he ended his rookie campaign with a pair of goals and ten assists in 70 NHL games. He didn't show enough confidence over the course of the season, but I'll probably never forget that rush in Colorado back in October. Being paired with Eminger and/or Muir didn't help Green's development, and if the team was smart they'd bring in a veteran to pair with him going forward.

Muir, Bryan (7, 17); Mercifully, Muir didn't have to play enough to be able to register "big" numbers, as he ended the season - and his Caps career - with three goals and four assists.

Morrisonn, Shaonne (4, 14); Mo wound up with three goals and ten assists and established himself as a very solid defensive blueliner. Once paired with Milan Jurcina, the duo look like they'll be around for quite some time, banging bodies and blocking shots. Mo did take a few too many penalties, especially late in the season, but that was likely the result of him losing a bit of concentration and being played against other teams' top lines. As he matures, the penalties should come down.

Erskine, John (2, 2); Many Caps fans love(d) Erskine because he's a banger and because he seemed to bring out the best in Eminger. Big John ended the season with a goal and six helpers in only 29 games, but also had a minus-13 rating in those games. Did he do enough to warrant a new contract? Probably not with the Caps. 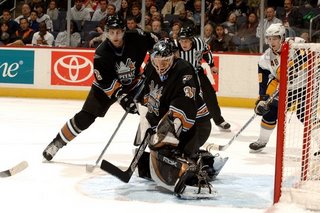 team's MVP this year, compiling a 22-24-6 record with a 3.00 GAA and .910 save percentage. When he went down with a knee injury, the team hit rock bottom as they missed his leadership as much as his skill.

So there you have it. On whole, I'd say the forwards performed fairly well, the defense was a huge disappointment (though the above doesn't include pleasant surprises Milan Jurcina and Jeff Schultz) and the goaltending was as expected. The team made some measurable progress - both absolutely and relatively - in key areas (such as power play and penalty kill efficiency, goals against, goals for and shots on goal against), but there' is unquestionably plenty of work to be done both on and off the ice. Vogs called this offseason the most important one in the past 25 years for the Caps and I would agree - it should be a very interesting summer to be a Caps fan.

Oh, and if you've read this far, you're a trooper. Then again, this post wasn't nearly as long and difficult as the season, now was it?