Share All sharing options for: TSN's Take On The Caps' Off-Season Game Plan

Scott Cullen of TSN (slogan: "Like ESPN, except we give a damn about hockey!") has his thoughts on what the Caps should (or will) do this off-season. The article serves as a nice compliment to what I posted this morning, because it goes into much more depth on some of the things to which I alluded.

Anyway, there's nothing earth-shattering in the article, but he does throw a few free agent names out there as possibilities, including Scott Gomez, Chris Drury, Peter Forsberg, Mike Comrie, Tyler Arnason, Ladislav Nagy, Kyle Calder and Scott Hartnell up front and Roman Hamrlik, Andrei Markov, Brian Rafalski, Andy Sutton and Scott Hannan on the blueline [note: I linked each to each player's TSN.ca bio for your convenience, and if you're curious as to how much money the guy made this past year, head to NHLPA.com].

Of the players mentioned, only the thought of Sutton in Caps' red, white and blue makes me throw-up in my mouth, though some names obviously excite me more than others (and some are obviously more realistic than others).

But my real question after reading this article is, "What the hell is the basis for the TSN.ca Rating that Bryan Muir ranks as the top Caps' blueliner?!" 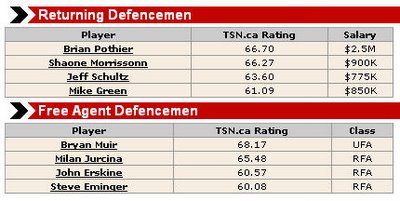