As I watched the Tampa Bay Lightning crap away a shot at the Division title last night at home to the mighty Thunder Cats, I actually for a moment thought, "At least I don't have to deal with that frustration/heartbreak." Then I remembered the last 81 games. Oh well. For better or for worse, it all ends today.

Besides individual achievements, there's a lot on the line in today's game against the Slugs - a Caps win and a Blackhawks regulation loss in Detroit would catapult the Caps past the 'Hawks and out of the draft lottery, a scenario about which I'm sure we all have some mixed feelings. In addition, today's game provides us with the opportunity to watch Chris Drury and dream of him wearing a Caps' sweater next year, even if we have no clue what that sweater is going to look like (it does make the dreaming harder... does anything ever come easy for Caps fans?). In fact, I wouldn't mind if Drury and his current right wing were to compose two-thirds of the Caps' top-line next year. That right wing? Yup. Dainius Zubrus.

But, of course, the post-game festivities are what today's all about. Speaking of which, which one of you chuckleheads (I swear it wasn't me and KB has denied it as well) asked this in Tarik's chat yesterday?

Bethesda, Md.: Tarik, will you be showing up for the bloggers' post-mortem/get together tomorrow after the game versus the banana slugs?

Tarik El-Bashir: Yep. J.P. sent me an invite the other day. I'll be there as soon as I'm done writing.

Thanks for doing so - it'll be good to see him and all of you there. And after they kick us out of Clyde's, we'll be heading up to Adams Morgan to Ventnor's to watch the Habs take care of business at home against the Leafs, and B.C. win yet another National Championship. By the way, you know you're old when: your after-party starts at 7:00... p.m. Whatever. That's how we roll.

Here's today's schedule of games, with spots and seedings up in the air all over both Conferences. Enjoy the day, and we hope to see you at Clyde's after the game. 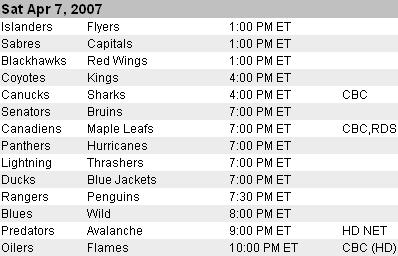 The Brilliant Musings Of J.P. You May Have Missed From The FanHouse:
Daily Awards