Of Socks And Sox

Share All sharing options for: Of Socks And Sox 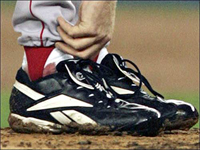 Because the powers that be don't need to damn-near launch a Congressional investigation into whether or not a hockey player actually bled.

I always liked Gary Thorne as a hockey play-by-play guy, despite his annoying inability to pronounce Janne Niinimaa's and Mathieu Schnieder's last names, but the way he dropped the "paint" bomb the other night was truly bizarre. And the funny part about it (to me, at least) is the number of people who were/are willing to believe it, given how self-aggrandizing Curt Schilling has always been. And now it's all over the news - is it blood? Paint? Ketchup? Do people honestly care?

It's the biggest story in the baseball world this week and it's about a player who may or may not have gotten a little spot of blood on his sock. What a bunch of warriors.