Is there a goalie controversy looming in New Jersey? No?

The Caps split the weekend home-and-home with the Devils, improbably beating Martin Brodeur in New Jersey, and perhaps predictably losing at home to his backup, Scott Clemmensen. Some thoughts on the weekend set:
Next up is Florida tomorrow night, but the real question on everyone's mind is "who won't be around for that game?" Dainius Zubrus? Richard Zednik? Jamie Heward? Ben Clymer? The usher at the top of the stairs between sections 110 and 111? CapsNation sits anxiously at its metaphoric collective computer hammering the "refresh" button at TSN.ca. 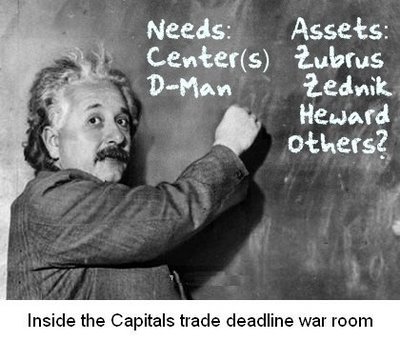