Chicago And Indianapolis: A Tale Of Two Hockey Cities

Share All sharing options for: Chicago And Indianapolis: A Tale Of Two Hockey Cities

Bobby Hull. Stan Mikita. Glenn Hall. Denis Savard. Tony Esposito. Mike Peluso. Three Stanley Cup championships, ten Vezina Trophies, eight Ross Trophies, a half dozen Calder Trophies and the best uniforms in all of sports. Looking over the history of the Chicago Blackhawks gives one a good insight into the history of hockey itself.

Besides being the birthplace of NHL-great Ken Klee, India-no-place was one of the "Original Five" teams of the Central Hockey League, where the Indianapolis Capitols (no relation) played all of nine games back in 1963 before they were forced to move to Cincinnati due to an explosion at the Indianapolis Fairgrounds Coliseum. Want more details? Of course you do:

On October 31, 1963, during an Ice Follies show, a propane tank tipped over in the commissary under the bleachers on the southeast corner of the Coliseum. When the gas came in contact with a spark it caused a large explosion. A couple sections of stands were obliterated. 73 people were killed and nearly 400 were injured. Following the explosion, the ice rink was used as a morgue.

"The ice rink was used as a morgue." That may be the single most "hockey" quote you'll ever read.

Prior to those Capitols and their lengthy stay in Indiana, Indianapolis had an American Hockey League team called the Capitals (again no relation, though at least they had the spelling right), and a mere sixteen years after the Capitols left Indy, the city got another CHL team, this time the Indianapolis Checkers, err, Checkers, who apparently only had two players in franchise history. 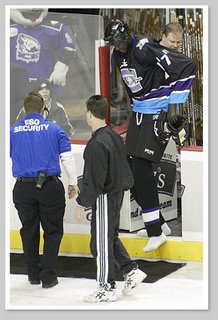 62), the Racers (1974-78), the Ice (1988-2002, 2004-), another incarnation of the Checkers (1984-87), and perhaps other franchises that I'm too lazy to dig up - but the evolution of hockey in "The Circle City" unquestionably reached its zenith with the arrival of one player who would forever change the face of the game itself. I'm talking, of course, about Manute Bol, who laced up the skates for the Ice back in 2002. Bol never actually got on the ice for the Ice, but it's safe to say that he paved the way for such future ridiculously tall NHL stars as Zdeno Chara and Gheorghe Muresan.

Finally, the Indianapolis Racers of the WHA also left their mark on hockey history by being the first professional team to employee a kid named Wayne Gretzky. 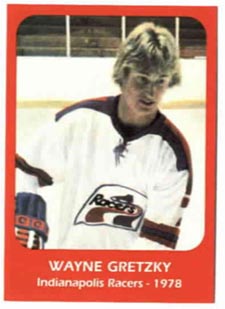 I'll admit that I have no idea what became of Gretzky after the Racers folded in 1978, but I'm told that he went on to bigger and better - some would say great - things.

So there you have it. No, it may not be Chicago and it certainly isn't Detroit. But they've paraded the Stanley Cup through the streets of Indianapolis as many times as they have in St. Louis, and with a storied history that includes storing dead bodies at the rink and a 7-foot-7 defenseman, I'm comfortable calling Indianapolis the Midwest's other other Hockeytown.