Sorry for not posting for a little while - I've been felled by the same flu bug that has forced the Caps to give the apparently-atrocious Timo Helbling 13:30 of ice time last night. Hopefully the Caps and I will feel better later tonight and on into tomorrow. Until then, enjoy the cover of the current issue of The Hockey News: 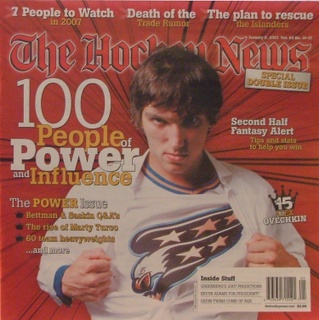 Faster than a speeding bullet, more powerful than a locomotive... sounds about right.

H/t to hockey nut for the pic.